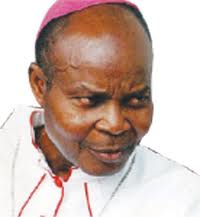 A Christian cleric, the Catholic Archbishop of the Metropolitan See of Lagos, Dr. Adewale Martins, has called on President Goodluck Jonathan to pay more attention to impunity and corruption. He said a situation where the corrupt were let off the hook would spell doom for Nigeria.

The cleric was speaking to a Punch correspondent in an interview on Friday where he said that there was a need to allow the law take its full course on corrupt individuals, irrespective of their status or affiliations. He said, “Our President has to realise that the nation is bigger than any individual and any group of people. Therefore, if anyone infringes on the right and the good of any nation, such persons need to be treated according to law… In other words, if you have people who are engaged in activities of corruption that tend to affect the well-being of the nation, either economically, politically or religiously, such persons need to be treated according to the law.

People do all kinds of things with the nation’s resources; they do all kinds of things even with religious sentiments and they go scot-free. It is not helping us… I think the President should pay attention to this a lot more like never before. That is not to say that we have not realised that to rule Nigeria is not easy but where there are principles, those principles must be followed.”

Meanwhile, he frowned at the call for taxing of religious organisations, saying the church had a role to play in providing social services. According to him, “I’ve heard some people argue about paying tax. The fact of the matter is that offerings that are brought to the church are people’s gift to God. These people have paid their taxes at their places of work and wish to donate it (offering) for the furtherance of the gospel and social services. That is what the offerings brought to church are meant for.