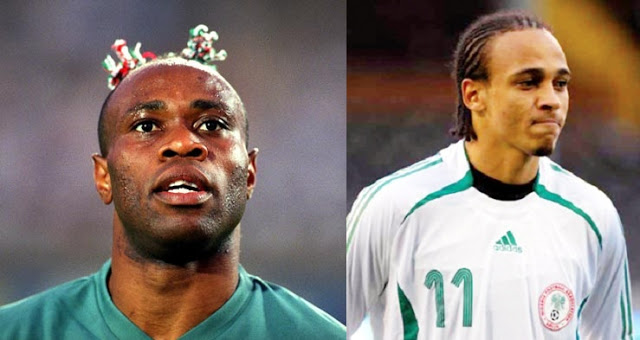 Oh my God, this is mad funny and at the same time it’s not because Taribo isn’t happy.

Osaze went on twitter and tweeted that football administrators had failed to treat former international stars right, citing late striker Rashidi Yekini, Femi Opabunmi and Taribo as examples. “Yekini, (may his soul RIP) our legend died in poverty…Femi Opabunmi lost his sight and struggling to feed now…T. West I heard not so comfortable and few others,” Osaze said.

Taribo got to read this in the papers and had to reply him. Please click read more to see his reply.

“It is embarrassing to read such comments about me in the newspapers. The last time he probably saw me was in 2008, so what does he know about me?

“Have I asked him for money before? God has been kind to me and my ministry and I have not begged anybody for money. I am doing well; I am not broke and never will be till Christ comes. In Christ, I have everything, so I am not lacking. I think he has lost track and needs to get himself together. “He should shut up and focus on his career instead of insulting his seniors all the time. He needs to respect his elders. His utterances smacks of indiscipline and unprofessionalism. He should apologise to everyone he’s been abusing on Twitter because if he continues like this, he will not go far.”

Comments onTwitter was not the best way to fight the cause of Nigeria’s ex-footballers. “If he is fighting for ex-players, then that is not how to go about it. He should come home and fight those who are not helping the footballers.

“How many ex-footballers has he helped? How can he stay in England and fight for a cause in Nigeria? He should join his seniors and fight for their cause because his approach has no foundation,”