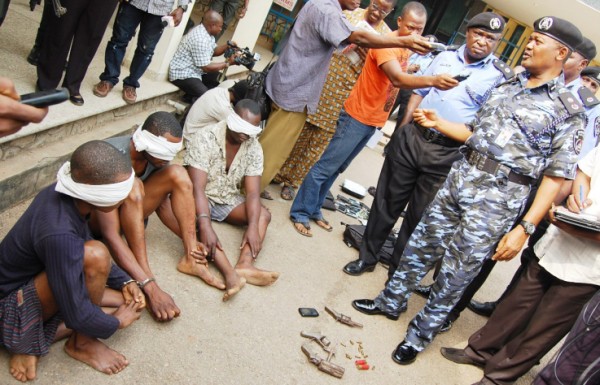 The Oyo State Police Command recently paraded three suspects alleged to have been involved in the kidnap of Mrs. Titilayo Oluwole Rotimi, wife of the former Governor of Western State last year.

While parading three of the suspects at the State Police Command, Eleyele, the Commissioner of Police in the state, Mr. Mbu Joseph Mbu said the suspects were arrested in Ogun State. With the arrest, more facts emerged, as the prime suspect told newsmen that they were paid the ransom of N13million before Mrs. Oluwole Rotimi was released.

According to the suspect who identified himself as Godwin Mfon from Akwa Ibom State, “We collected N13 million. I collected N2.5million. I used N1.1million to settle my debt and used the remaining change to buy a navy blue Honda Accord car with registration number LAGOS LSR 446 BB”. Mfon, who claimed to be a graduate of a university in Calabar, stated further that his mistress was instrumental to his arrest.

Asked how he delved into the criminal act, he said it was frustration that led him into it. “I contested election for a local government councillor in Ward 2, Akwa Ibom, but I was defeated. It was then my friends invited me to Lagos where they introduced me to kidnapping.”

Another suspect, Johnson Kingsley also confessed that he took part in the kidnapping, saying he got N2million from the heinous crime. However, there was heated argument between two of the suspects, Kingsley and Akiniyere Sunday, an Okada rider who claimed not to know anything about the incident. He said, “When they were coming, their Nissan car had a fault and they asked me where to get a mechanic. I told them and I used my Okada to convey them not knowing they were kidnappers.” But, other suspects insisted that he was lying adding that they used his house as relaxation point.