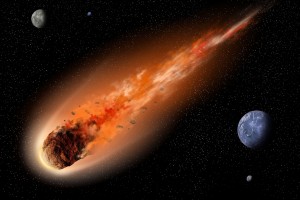 A 50-metre wide asteroid will whiz past the earth on Friday — closer to the planet than any other asteroid of this size — becoming a much anticipated event for astronomers and stargazers from around the world.

The asteroid, called 2012 DA14, will pass some 27,630 kilometres above the earth that is well within the range of many geosynchronous communication and weather satellites. It is about 50 metres in size and, according to NASA, has no chance of hitting the earth and any of the satellites orbiting the earth.

Hassan Hariri, the CEO of Dubai Astronomy Group, said Nasa observers reported that a sizable asteroid would fly harmlessly past Earth today at 2.24pm (ET US) (19.24 GMT) and then head away from our planet. “And then we likely won’t see it again for at least a century, after Earth’s gravity slingshots the space rock onto a shorter orbit that takes it closer to the sun,” he added.

Quoting an asteroid expert, Donald Yeomans of the Nasa’s Jet Propulsion Laboratory in Pasadena, California, Hariri said the asteroid, travelling at 13km per second, will pass between the higher orbits of communication satellites and the lower orbits of navigational Global Positioning Satellites (GPS).

Scientists believe that the collision with earth of such a huge asteroid at this a speed could have been disastrous. A comet had hit the earth in 1908 in the Russia’s Siberia region, destroying some 80 million trees in 2150 square kilometres area.

The asteroid was discovered last year by a group of amateur astronomers in Spain, and was being closely monitored by scientists and astronomers from around the world since then. Professional and amateur astronomers have been standing by with telescopes and binoculars to catch a rare view of the celestial body.

Dr Manahel Thabet, a researcher in quantum mathematics and member of the DAG, will be present at the DAG’s facility. Dr Thabet is also a specialist in measuring universal distances. Hariri said DAG had a plan to develop a research programme in the near future. “This event is a good chance to collect data and set up a research team to carry forward a research base programme at the DAG,” he said. [GN]