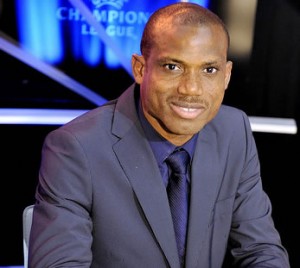 Former Super Eagles captain, Sunday Oliseh has distanced himself from any coaching job in Nigeria for now.

He said the system and authorities make it difficult for a serious coach to succeed.

Oliseh, who was a guest and a panelist at the Supersport analysis programme said many Nigerians have asked him to consider a coaching job in the country which he turned down.

“People have asked me why don’t you take a coaching job in Nigeria and I said I don’t think I would want to do that because I know my country more than you guys and have served it for eleven years winning everything with it. But now we are seeing changes. We have a government and minister that seem to be appreciating what we are doing.”

He said what they have going are the people who love them with a passion.

“Keshi knows that because he was part of the group even though he served halfway. If you look at all this you will want to think twice before taking a job in Nigeria. For instance, three times Shuaibu Amodu qualified Nigeria for the World Cup l was his captain, I saw the sick but he wanted to do the job sometimes l had to hide things from my colleague but he was so passionate and he said even if he had to go to heaven that way he wants to take his country to the World Cup. You know what? He was sacked and they brought in a foreign coach who only went to the World Cup and collected our money and left us after the World Cup. It hurts. And that is why Keshi is talking the way he is talking.”