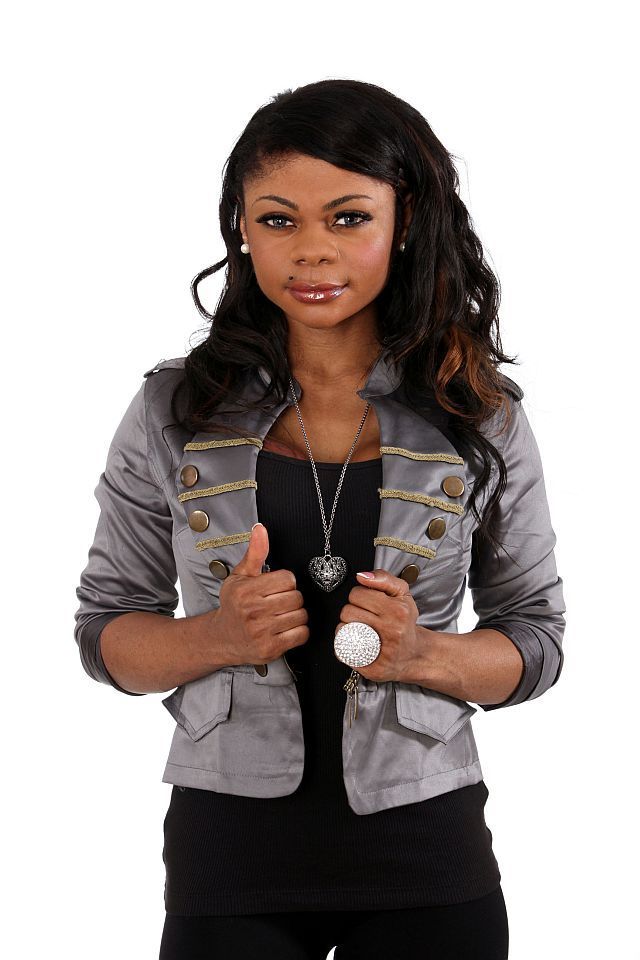 Karen Igho, co-winner of Big Brother Amplified in 2011, tells Us about her life

To be honest, the spotlight cannot be shifted from me because it is God that put me there. I know where I am coming from. Do not forget there is a BBA winner from South Africa already and I am still where I am. The thing is, if people like you, they like you. If they want your star to stop shining, it will. If you are humble, grateful and real with people, you would still on top. If you are bitchy, you will not last long. I am taking corrections from people who have been there like Derenle and Uti. I am trying to learn from them. Whoever emerges as winner, I wish them the best.

Rumours about my friends -Denrele and Uti

This interview is not about them. It is about me, Karen Igho. I am not here to discuss people’s sexuality. It does not concern me.

About my boob job

People need to understand that I did not do it to impress anybody. I did it for me. When I did it, I was young and the reason I did it was because I had lumps; they took out some tissues and in the process, my breasts reduced. At that time and age, I was insecure that I had lumps that could develop into cancer and my boobs were small, so I went to get implants. They are not even that big; sometimes it is my bra that makes them big and people would be talking about my breasts like they have never seen breasts before. I did not do it for anybody. It was for me and because of the way I felt. I really thank God because a lot of women have cancer but mine did not get to that stage. Two of my sisters also had lumps, it is hereditary. My aunt died because of blood cancer, my granddad died because of brain cancer and my uncle died because of eye cancer.

I am partnering NGOs

I am involved with Non Governmental Organisations that are into any type of cancer awareness programme. On my birthday, I went to Lagos State University Teaching Hospital to see kids with cancer. I asked them what they needed and some of them needed a transplant, some needed blood, and I helped the little way I could. I do not limit it to cancer alone. The campaign for HIV and AIDS is also something I am passionate about. There is also the youth empowerment programme too. I see myself as a stepping stone for other youths who are out there struggling; youths who are asking themselves if they can make it because Nigeria is a tough country to live in. Yes, you can make it if you put your mind to it and work hard. Look at me, from nothing to something. I want people to learn from me.

I grew up in the village. I stayed with my grandmother and we lived in a mud house. Whenever it rained, we would be soaked inside the house. The food we ate then was straight from the bush. I had a lot of bush meat, that is why I love Nigerian food. I call them vintage food. Although I eat international dishes, I prefer Nigerian food. I also like to cook because I learnt it from my mother and my grandmother. My father died when I was 12 years old. Growing up for me was not easy. My dad is from a wealthy family, he is Peter Igho’s brother. It was the situation and circumstance at that point in time. I bet if he was alive he would have seen things in a different way. I was abused as a child, not sexually. I was maltreated because I had to live with relatives. Nobody would treat you like their own. My parents had me when they were young and they had various things they wanted to do. I had to stay with different relatives. I was beaten well.

I won Big Brother and I am grateful to the people that voted for me. The one I picked on the most was how easily people can be lied to. It is not good. How tabloids fabricated lies and gave them to the public to read and they bought them, without knowing how true those stories were. What I have learnt from life is that it is not good to judge. It is not every girl you see that is a bad girl; because these days, the good girls are now the bad girls and the bad girls are now the good girls. I know that God would always be with me. I could not defend myself but God defended me because if I had got out of the Big Brother House and did not win, I would have been the most hated housemate in Big Brother history. I thank God for making me win and making people see me for who I am. The people saw that there is more to me than meets the eye, I thank God for that. They gave me 91 days to showcase the kind of person that I am and I did and that was what Africa fell in love with.

Where did you get your source from? Can you please give me evidence and proof? Even the pictures are all ‘photoshop’. It is not fair because at the end of the day, I will want to get married and do some other things. I know when I was in the house, people were expecting me to be the one to have sex, they were expecting me to be the one to shower naked first. With the way I behaved in the house, people could have figured out that I am different from what they have read about me. The only thing I have is my pride and dignity. My privacy and my body are reserved for my future husband. For 91 days, I refused to bath naked, I was using a bikini and lingerie to have my bath. I took about 20 bikinis into the house to have shower with and to protect my pride. Coming out and seeing my own people trying to bring me down made me feel bad. Other African countries were not laughing at me but the writers of the negative stories because they watched me and analysed me based on the way I acted in the house. They concluded that I could not have been the same girl. My fans, the real Karenified, were really supportive and I am very grateful.

How I was assaulted last year by a policeman

That particular day, it was my friend, Denrele, that invited me to an event and I had to honour his invitation. I had my tag and my invite. I even took a friend, to tell you how many invites I had. I even took my own bouncer. Before the incident happened, my bouncer had been discharged to go home. If he was there, it would not have happened. People always quote what happened that day wrongly. It was a MOPOL officer, not a bouncer that hit me. A policeman in uniform did it to a citizen. The reason I want to talk about it is because no man is allowed to hit a woman just like that. I got to the event and parked, but the guy said he was saving the space for someone and that if I was not going to give him money, I should park somewhere else. I asked if he was for the party and he said ‘yes’.I told him that I was also for the party, but he insisted that I give him money. I told him to let me go to the event and return. When I got back, I saw that my car had been blocked in such a way that I could not move out. He allowed someone else park behind me on purpose because I did not give him money. I told him that I wanted to leave and he should help me look for the owner of the car. He told me he wasn’t working for me. I told him that the event was organised by Smirnoff Ice and they were the ones that hired him; he said ‘yes’. Then I asked why he was angry. He said he would not do anything till I give him money. I told him not to worry that if it was how he wanted it to be done, I would need his name. I think the man did not really know who I was. My friend was even with me, she just got back from the UK. She too was shocked. I asked for his name but he said he would not give me and if I talk anyhow, he would slap me. I asked him if it was because he was holding a gun and putting on a uniform. Before I knew it, the guy gave me a heavy slap. The slap sent me to the floor. My jaw shifted and my face was swollen for a week. I had a concussion on my head. There were witnesses. He threatened he was going to shoot if anyone helped me. When he realised what he had done, and seeing that people were moving towards the scene, he fled. I got his name and told the organisers what happened and they sprang into action. I was traumatised and shocked, I got scared. I told them I was going to sue for what they caused me, but we later settled out of court.

I am the kind of girl that when I am with a guy, I am with a guy. I do not cheat or double date. I stick to one man. I am a faithful, loyal, honest and God-fearing kind of person. When I do anything, I put myself in the person’s shoes. I was about 22 years old when I had my first heartbreak. The guy travelled to America, so we had to call it quits. He was a nice person but I had to move on. A lot of things happened. I am from a strict Christian home, so I did not start dating till I was about 19 years old. He was the first person I had sex with. I did not lose my virginity till I was quite old. Because I have a petite figure, people don’t know how old I am. I was 20 years old when I lost my virginity.

A fan that proposed to me

I went for a show in Warri, Facebook Unplugged. I turned him down because then, I just won Big Brother. I did not know him and he just gave me a ring. I said ‘no’ because I did not know him. He could be psychotic, who knows? I think he was playing, though. It was nice of him. At that time, I did not know if he loved me or my money. If he comes now, I will probably consider him because it is about a year and a half now. I have invested the money.

You never know when it comes to relationships. I say so because you can be seeing someone for about a year and it does not work out because it was not meant to be. Maybe because of my busy schedule or my career. I might be seeing someone now, but it does not mean that few months later, I will not be single. At the moment, I am seeing somebody but I want to see how it goes.