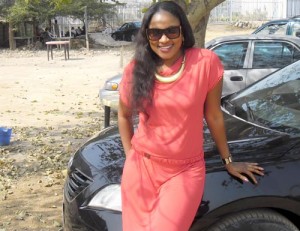 While growing up in Enugu, her family insisted that she commit herself to what back then was seen more as one of the fields with prestige, Biochemistry.

And to please them, she buried herself into lab work and plenty of studies that would make her a biochemist. But after leaving the university in 2006, her life took a dramatic turn. Instead of the lab, she “absconded” into the world of her first love, music.

Today, Odinaka Edith Edward, a.k.a. Editha, model and actress, is one of the new faces of African music and entertainment. MORAKINYO OLUGBIJI spoke with her in Lagos

What brought you to the music world?

I have been a musician from birth. Back in primary school I had composed and sang a song that thrilled my dad so much that he wanted to know where I got it from.

Back in those days, I was fondly referred to as ‘Channel O’ in my family because, as many said, I had an angelic voice. I was the singing one and I had an ear for music. Just by listening to a song for the first time, I could sing it freely. I also used to rap the rhymes of other rap artists like Snoop Dog.

And then you chose a brand of music that is different from the one sang by Snoop Dog?

Many have wondered why you do your kind of music when you could be doing the ‘commercial’ type of music that is popular nowadays.

The truth is that I did not enter the music industry for the money alone; I have something else in mind. I have a message I hope to pass across to people and I realised that the best way to do that is to put it into songs. I also realised that music could cover a lot as regards the growing hatred, poverty, hopelessness and the general insecurity in the entire world, not only in Nigeria.

Some people may also want to box your music into the gospel genre. What do you think?

Even so, what people call gospel music is a collection of inspirational rhymes whose goal is to help create a better world. So my journey into entertainment is like the late Michael sang, “To heal the world.” My music is not gospel, but inspirational.

Lagos and some parts of Nigeria is aglow with your hit track “You Dey Sweet My Belle.” How did you record such success in a very short time?

(Laughs) My dear, I owe my success to God and my manager. With the help of God, that guy has been working round the clock for me.

Who is your manager?

He’s an easy going, quiet guy, but one that can sell snow to an Eskimo. His name is Osuagwu Kingsley a.k.a. Sir Jo. He is the MD of Joshu Media Consul; a company that specializes in media consultancy services and entertainment. He’s a known name in the entertainment industry in Nigeria.

Since you have a passion for music, why did you study Biochemistry?

You know, those days are different from the days we are now. Back then, people believed in reading professional courses. Even one’s family had a hand in choosing a course of study for you, besides I was naive then. I had to follow the counsel of my parents and my brothers who did not see music as anything good. But you see, you can only excel easily with your talent. So after leaving the university in 2006, I realised that I had to delve into my calling.

So since 2006 you have been trying to find your bearing in the society. Does it mean that you were seated at home dreaming of finding it someday?

I modelled a few times for Hearts magazine. I have also played movie roles such as the one I played in “Throne of Obstacles,” a movie which was directed by Iyke Odiefe. I featured as a nurse in that movie with the likes of Kate Henshaw.

They should look forward to the release of my video in 2013 and my second album.

How did you spend this year’s Valentine’s Day?

Well, I had shows around Nigeria. On the 13th and 14th of February, I featured in various Valentine bash in Lagos and Port Harcourt.

Have you done any international shows?

Some are coming up before the end of 2013. I just want my fans to keep their fingers crossed. I have plans to take over and go international soon.

Do you have any words for your fans?

Yeah. We would set a new pace on this journey. Expect more from me this year. I love you all.