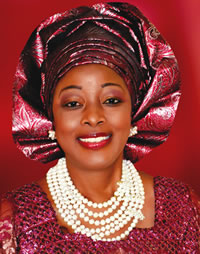 For Funmi Olayinka, it is interesting being a woman in politics. It becomes more interesting when you are the deputy governor of Ekiti State.

“Politics for me, and I believe a number of other new female entrants, is becoming more interesting.  We aren’t part of the female politicians who were either marginalised or had no roles assigned to them. So, I will boldly say yes, I have being fairly treated not minding my gender,” she begins.

Argue that some other women still face marginalisation. She agrees but says, “I have not experienced it as a person. The governor has brought a lot of civilisation to issues bothering on gender equality and mainstreaming in our state and that is why you will see our women do things without remembering the era when women were spoonfed on the account of gender. I am an irredentist believer in the fact that women should get positions purely on merit rather than on sympathy. We have women in this country who are eminently qualified for whatever positions. Women politicians should compete for positions on the basis of what they have to offer. I am sure that our men would respect us and even listen to us more when we do not offer ourselves as political liabilities.”

A former banker with over 20 years experience, a search for a female running mate for Governor Kayode Fayemi fished her out. According to her, after consulting with her husband and some others, she took up the gauntlet.

Being in office for over two years, what has the experience being for her? Refusing to be referred to as a spare tyre, Olayinka says time spent in the state has being worth its while.

Hear her: “It has been over two years of excitement in governance for us. Unlike other deputy governors, the deputy governor of Ekiti State under the current dispensation is not a spare tyre, but a co-traveller in the vehicle of restoring the lost glories of the Land of Honour. When you are being driven by a governor who believes more in successes than efforts, then you will understand what I’m saying. Dr. Kayode Fayemi is a workaholic and he does not condone laziness. With him, you cannot be redundant. He listens and makes up his minds. He does not mind succumbing to superior arguments when necessary. He celebrates success and not efforts and so whenever he gives you an assignment, he expects performance, not minding whether you are male or female.”

The life of a deputy governor, she says, is not different from any other career woman. You then wonder when she observes her rest.

“I resume in the office by 9a.m and most times, I will not leave until it is very 11p.m. I have heard people discuss in low tones that the governor and his deputy don’t sleep! I think this is mainly because even when we are not behind our desks, we are finding one solution to one problem or the other. It is all in our bid to raising the standard of living of our people. There are times when you close from meetings around 4a.m and  you are expected at functions around 8a.m again!

“Meanwhile, my boss takes no excuse for things not properly done. So, for you to work with him, you must be willing to get innovative and apply yourself to discharging your duties effectively. The mantra is hard work,” she adds.

If she exudes so much enthusiasm about her job, how come it was rumoured she had resigned? With a sigh, she replies: “I didn’t take up the job of being deputy governor from the rumour mill and if I am resigning, it is definitely not for my boss to pick up such information from the gutters. When the rumour started, honestly, I was not bothered. If someone simply wakes up to assume the position of your spokesperson without being appointed, do you lose your sleep as a result of that? I have put that behind me. The governor, his wife, and the good people of Ekiti know too well that it was all the figment of the peddlers’ imagination.”

Success at work, she believes, must correspond with a peaceful home. She is lucky to have children who are grown and a husband, who understands the nature of her work. Olayinka, however, confesses that she cooks and does laundry like any other woman.

She says, “I still do all the duties expected of a woman. I cook, do washings, albeit light ones. As grown up as the children are, they will tell you that you have to be careful with Madam O when it comes to doing things right.”

Thrusting aside any stereotype of a female politician, she tells you she still lives a normal family life. “As a banker, I wasn’t having all the time in the whole world to myself. My husband is a very understanding person who allows you to flourish to the best of your ability. Most times as a banker, I remember that I had causes to rush home from work, leave a note behind for him on occasions when I had to make unplanned trips, and each time, he demonstrated uncommon understanding of my situation. He is always willing to support me to succeed at work.

“As for the children, they are grown up, and also ready to be supportive of me. We make plans to still be together as much as possible. Beyond the fact that we communicate regularly on the telephone, members of my family come to Ado-Ekiti at the slightest opportunity to be with me. So, not much is suffering in this aspect.”

Now let’s talk fashion. She looks like one who knows what time it is in the world of glamour. Agreed, she loves to look good but her description of fashion is cleanliness.

“To me, fashion is looking clean. I wear anything provided it makes me free and independent. Occasions predominantly dictate what I wear; I don’t wear native dresses to work between Mondays and Thursdays, and I don’t believe in breaking the banks to get properly dressed. Fashion fetish? There is none.”

With the number of years spent at the bank, does she still miss her first job?

“Who would not miss his or her first love?” she asks laughing. “All I knew ahead of joining politics was banking. Remember, I spent the greater part of my youthful professional life as a banker. But if you ask me, serving the people as the first democratically elected female deputy governor in a sophisticated state like Ekiti is more exhilarating! Yes, once in a while you cannot help flashing back to banking, but the joy of being useful to a lot more people is a good way to live a fulfilled life.”

Lastly, remind her that one day, she will retire from politics. When such happens, what will she do?

Olayinka says, “I have always desired a quiet life. Then, I will be able to get more dedicated to the works of my creator, read books and become more dotting in the affairs of my immediate family.”