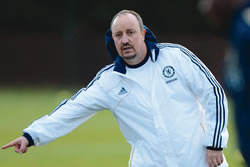 Rafa Benitez believes that the disaffection that surrounds him at Chelsea stems from his previous years of success in charge at Liverpool.

Since taking over from Roberto Di Matteo on an interim basis in November, the Spaniard has been ripped by unhappy supporters, with results doing little to stem the tide.

“The biggest problem is that I was manager of Liverpool and I’m paying for the success I had at Anfield,” Benitez told Spanish radio station Radio Gaceta de los Deportes. “Nevertheless, I just continue working hard and focusing on being successful with Chelsea. All we can do is show complete dedication. When we win, there’s no one in the world happier than me.”

The Spaniard’s tenure has seen the Blues exit the Champions League at the group stage and fall to Swansea City in the Capital One Cup semifinals as well as lose ground on the top two in the Premier League to leave them fighting for a place in next season’s Champions League.

However, Benitez refuses to take full responsibility for all of those struggles, instead opining that the rot had set in by the time of his arrival at the club.

“When we arrived, the team was practically out of the Champions League, was slipping down the Premier League and had been given a hiding in the Super Cup [by Atletico Madrid],” he explained. “It was a team in transition and the results weren’t good enough.

“The biggest difficulty has been having very little time to work with. We have played the most games in Europe of any team this season. You want to work on tactical aspects but you have to rotate and rest players.”