Jay Z and Justin Timberlake will launch a 10-city stadium tour together sometime in the year. This came after the duo teamed up at the Super Bowl and at the 55th Grammys. Now, rumours have it that this new friendship Jay Z has found in JT is just a way of distancing himself from Kanye West.

There is the belief in some quarters that Jay Z had been avoiding close relationships with Kanye since he got hooked with Kim Kardashian in a serious relationship. The fact that JT and wife Jessica Biel sat with Jay Z and Beyoncé at the Grammys further fueled the rumour. 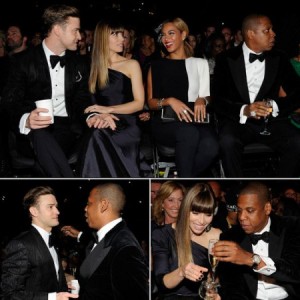 Besides, Kanye and Kim are away in Brazil and that explains why they were not seated beside Jay-Z and Bey…someone had to sit there, and who better than the guy who is relaunching his music career and has featured Jay-Z in his new song?

Going on tour together is simply because his latest song is Suit & Tie, and he featured Jay-Z. As much as he’s a star that is widely loved, the presence of Jay-Z will boost whatever audience he’d be having-i guess that’s why he featured him in the first place.