Tottenham Hotspur striker Jermain Defoe has become a first time father after his ex-girlfriend gave birth to a baby boy earlier this week.

The 30-year-old footballer was reportedly present at the birth and has seen his son everyday since.

A source told The Sun: “Jermain is thrilled to be a dad. It matures a person and he is determined to to live up to his responsibilities.”

The former couple revealed they were expecting a boy several months ago after briefly rekindling their romance in 2012. 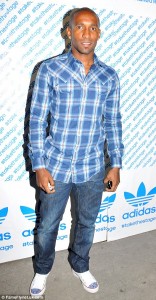 The England football star, who was dumped by Alexandra Burke in May after he allegedly cheated on the singer, got back together with Anne-Marie soon after.

Although Jermain and Anne-Marie are no longer an item, notorious ladies’ man Jermain will reportedly stick by her side and help support the baby.

Anne-Marie, 32, revealed her pregnancy when she posted a picture of her baby scan on Facebook.

She said: ‘There is such a special sweetness in being able to participate in creation of life. It’s a Boy…Mummies lips and Daddies head!’

A pal of Anne-Marie revealed that the couple were always close, but that they had a ‘stormy’ relationship, calling it quits on their romance once they realised that life was leading them in separate paths.

Jermain lists a number of stars as previous conquests and girlfriends.

But the source adds that Jermain’s ‘wild side in his twenties’ is now over. [DailyMail]