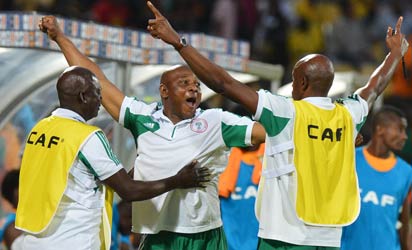 President Goodluck Jonathan on Sunday congratulated the Super Eagles for their superlative performance at the ongoing Africa Cup of Nation (AFCON) in South Africa.

The Eagles beat the Elephants of Cote d’ Ivoire 2-1, to clinch a semi-final ticket at the tournament.

A message on the Twitter account of the Special Adviser to the President on Media and Publicity, Dr Reuben Abati, said Jonathan thanked the players “for their masterly and superlative performance.

“President Jonathan thanks the Super Eagles for their masterly and superlative performance in the just-concluded AFCON encounter with CIV.

“President Jonathan joins all Nigerians in celebrating today’s victory by the Super Eagles of Nigeria.

“The President has watched all the matches, including this last one.”