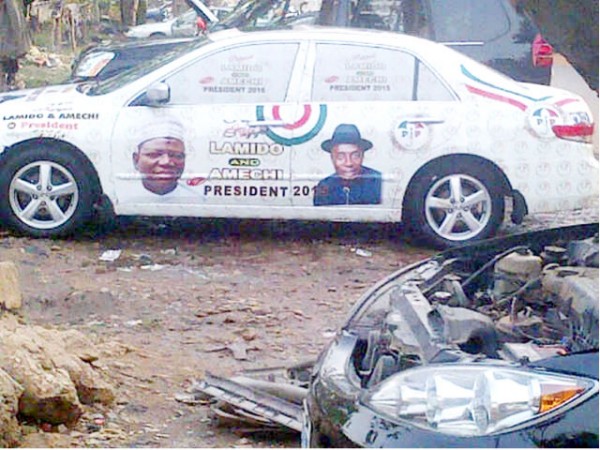 Following the sighting of a branded Honda saloon car popularly called ‘End-of-Discussion’ with a Lamido/Amaechi 2015 picture on the ever-busy Muhammadu Buhari Way (formerly Wharf Road), Kaduna, on Thursday, which led to speculations that indeed, Lamido, the governor of Jigawa state is nursing a presidential ambition, his spokesperson, Alhaji Umar Kyari, has said it is too early for anyone to link his boss with the 2015 presidential poll.

“His Excellency, the governor of Jigawa State, Alhaji Sule Lamido, is in Jigawa, concentrating on repairing the damage done to our state by the previous administration.

“As for his posters and other things you spoke about, we are not aware. His Excellency is not behind it, he is a loyal party man. We are in the era of politics, people can say anything.

“If you recall, he once said if out of 150 million people, his name is being mentioned in the political arena, it means he is making an impact.”

Speaking in the same vein, the Chief Press Secretary to the Rivers State Governor, Mr. David Iyofor, insisted that his boss does not have any presidential ambition.

Iyofor explained that Amaechi was concentrating on his responsibility of developing the state and was not involved in any plot to become the vice-president in 2015. He further distanced Amaechi from the posters linking him to any presidential candidate.

Iyofor said, “He (governor) has said that many times; that he was focused on the task of developing the state. The governor has no presidential ambition for 2015.

“This issue has continued to come up, but the truth is that he (Amaechi) has no presidential ambition and does not know anything about the photos linking him to any political office in 2015.”