Heng Sen, a boy from a small village in Cambodia who is almost three years old and still unemployed, is now considered one of the laziest children in the entire country. 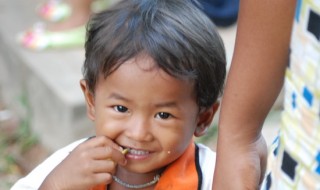 Our newspaper has learned that while nearly all other children from the same village his age and even younger are already working full-time jobs, Heng Sen is just lounging around the house doing absolutely nothing.

“I don’t know what to do about him, he is so lazy,” said Chantou Sen, Heng’s mother.

“He’s behaving so immaturely, like some kind of a baby,” Ms. Sen added. While her other three children are earning their way through life and contributing to the family’s income, Ms. Sen explained that Heng is still living in his own fantasy world, playing, and dreaming about what he is going to be when he grows up.

“I would like to be a doctor, or maybe a scuba diver, or even an astronaut, but I still haven’t decided for sure,” said Heng. In further discussions with journalists, the three-year old explained that he’s not lazy as everyone says he is, but that he’s still just searching for a job in which he will feel comfortable and also enjoy doing.

“It’s not easy to find a good job you know. I don’t want to just meaninglessly slave around, I want to slave around doing something I find interesting,” the child stated.

Heng said that he spends most of his time searching through wanted ads because there’s nobody to play with outside because everyone’s at work.