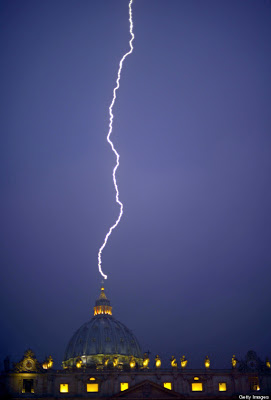 AFP photographer Filippo Monteforte, caught the amazing bolt on camera during a storm.

“It was icy cold and the rain was falling in sheets,” Monteforte said. “When the storm started, I thought that lightning might strike the rod, so I decided it was worth seeing whether – if it did strike – I could get the shot at exactly the right moment.”

And he was right as two hours later the lightning struck twice and he captured a still footage. “The first bolt was huge and lit up the sky, but unfortunately I missed it,” he continued. “I had better luck the second time, and was able to snap a couple of images of the dome illuminated by the bolt.”

The St. Peter’s Basilica is one of Catholic’s holiest sites.