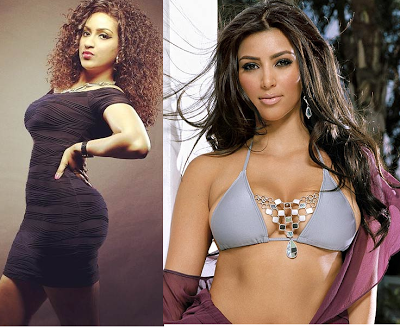 Darey’s LLAM Concert has come and gone; the rave reviews and positive commentaries it received was an indication that it was memorable and lived up to billing – as a never before seen show in this part of the world.

The highlight of the concert would be the cameo appearance of American reality TV star, Kim Kardashian as co-host; what most people have come to point out as a flaw. Supposedly, Kim K did not spend up to an hour but was allegedly paid about $500,000 – an allegation Darey has neither confirmed or deny.

Lending her voice to the outcry that greeted the choice of Kim K as co-host of the LLAM concert, Ghanian actress, Juliet Ibrahim, has condemned the preference for foreigners over African talents.

In her words:”Ok here’s my 2cents! Been reading comments about Darey’s concert and to be honest I don’t see why he will pay so much money and fly Kim k down to naija just for a 45sec intro on his show,like seriously! Bro, u could hv flown me from Gh and I would have represented! Lol no hard feelings but its about time we start appreciating our very own African talents then paying all these foreigners so much for 45seconds performances. Check me out, way hotter than some of them peeps una Dey pay big bucks for nothing better. #wordofadvice #momentoftruth”