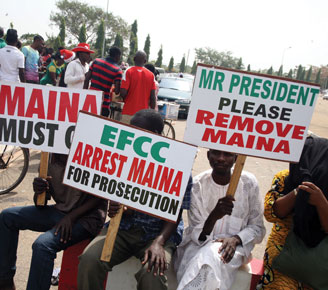 The Chairman and the Co-Chairman of the Joint committee of the Senate investigating pension administration in Nigeria, Senators Aloysius Etok and Kabiru Gaya, have given accounts of their experiences with the Chairman of the Pension Reform  Task Team, Mr. Abdulrasheed Maina.

Gaya, recounting his experience, said the committee received 7,800 petitions during its assignment which alleged that Maina coordinated the process of mismanaging pension funds.

Etok, in his submission, noted that Maina refused to join the committee on the tour of the states during the investigations to hear what pensioners had to say against him; instead he was busy condemning the Senate in the media.

“We called him to account for his stewardship in all the offices he was overseeing. When we exposed some things, he decided not to appear again. Instead of appearing before the committee, he would go on the media, condemning the entire Senate.

“He said he was not given fair hearing, but when we offered him fair hearing, he refused. He drives two bulletproof cars, in a country where pensioners are hungry. He used N1bn for jamboree in the name of verification abroad. He spends more than N8m every two weeks on personal security,” Etok said.