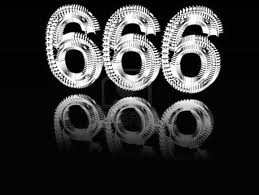 Maintenance workers endure a lot for a paycheck, but the Number of the Beast is too grave a problem for one Tennessee man.

Walter Slonopas, 52, quit his job after receiving his W-2 tax form with the number 666 stamped on it, reported The Tennessean.

“If you accept that number, you sell your soul to the devil,” Slonopas told the Nashville-based newspaper.

Slonopas worked for Contech Casting in Clarksville. He just wants the company to give him a new W-2 without a 666 on it so he can file his taxes, which he currently refuses to do.The numbers on the W-2 forms refer to the order in which they were mailed out, according to Bob LaCourciere of Revstone, the corporation that owns Contech.

But for Slonopas — and many other born-again Christians — the number refers to a horrifying event from Chapter 13 of the Book of Revelation, when a satanic beast takes control of Earth and brands everyone with 666.The distressing number has reportedly dogged Slonopas ever since he started working. He was assigned 666 for his clock-in number on his first day in April 2011. But he explained his concern and took a new number.Then four months later the time-clock system was revamped and Slonopas was assigned 666 again, prompting him to quit. But he returned to work a few days later after the company apologized and gave him a new number.

“It’s a desire to be loyal to his faith and to not be identified with the Antichrist,” Jay Phelan, a theology professor at North Park University in Chicago, told The Tennessean. “The company ought to find a way to cut him some slack.”

After the latest incident, however, Slonopas takes the number’s recurrence as a sign, not a mere coincidence. He does not intend to work for Contech again.

“God is worth more than money,” said Slonopas.