Man Steals Puppy And Put It Inside His Pants. 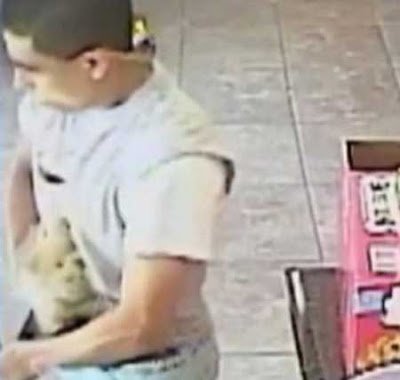 A surveillance camera in a pet store caught a robbery gone wrong.
Two unmasked men walked into the Zoo-Rama pet store, in Long Island New York. Harsha Perera, the owner of Zoo-Rama, said that his son was in charge of the store the day that the robbery took place.

One man spoke with the clerk distracting him away from the cash register, while the second man tried to open the computerized cash register.

After 20 minutes and three failed attempts the robber gave up on getting cash, Instead he turned to the cage of the puppies, where he grabbed a Pomeranian puppy which is valued at $1,000 and stuffed the puppy down his pants.

The adorable puppy did not go down without a fight, the puppy tried to jump out of his pants, so the man covered the puppy’s head with his shirt and walked out of the store.

The store owner Perera, is offering a $500 reward for information leading to the men’s arrest.

Police officers in Long Island have reviewed the security tape and they are asking the public to help identify the men who stole the puppy . If caught they may be charged with robbery and animal cruelty.