Man Watched Through Skype As Robbers Molest His Girlfriend

A man from North Carolina was chatting with his girlfriend over Skype when he saw through his computer screen a masked man walk into his girlfriend’s room brandishing a silver handgun. 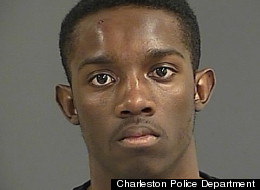 The call dropped, and he quickly called for help. A suspect is now in custody. Police are looking for two accomplices.

According to a Charleston Police Department report, three masked men — two with handguns and one with a baseball bat — entered a downtown Charleston home Monday morning and made off with six Macbook laptops, four cellphones, and around $200 in cash.

Three victims, all women, were assaulted and later treated at the scene by EMS, WCSC reported.

Shortly after, based on the victims’ descriptions of their attackers, Charleston Police arrested one suspect.

DeShawn Heyward, 20, was charged with armed robbery, assault and battery, burglary, kidnapping, simple possession of marijuana and possession of a firearm during a violent crime, ABCNews4 reported.

The remaining two suspects are described as black males, late to early 20’s, medium build, and about 5-foot-10-inches tall.