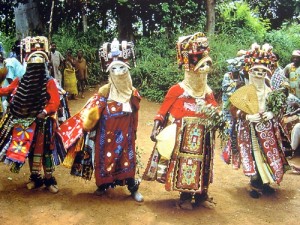 Three masquerades were yesterday arraigned before the Ogun State Magistrate Court 4 sitting in Isabo, Abeokuta, for allegedly killing an Islamic cleric during an Egungun festival.

The three masquerades; Shittu Adeyemi, 61, Waidi Babalola, 64 and Ajani Olabintan are standing trial over their involvement in the alleged killing of Lateef Amusa, during the festival held at Ijaye, Abeokuta.

The Islamic cleric, Lateef Amusa, was allegedly shot dead during an Egungun festival in Ijaye area of Abeokuta, leading to the arrest of the three suspects while the masquerade was said to have escaped.

According to the prosecution counsel, Augustine Ozimini, told the court that two of the suspects, Babalola and Adeyemi, who were first and second defendants in the suit were charged to court for conducting masquerade procession without permit from the state government and thereby committed an offence punishable under section 3 (a) (b) of the Public Order Law of the Federation, while the third suspect, Olabintan was facing a murder case.

Counsel to the first and second respondents, Adebiyi Ogundeyi, however, prayed the court to grant the application for bail on the ground that the offence committed by the accused persons was bailable.

Granting the bail application, Magistrate Idowu Olayinka said only two of the three accused persons would be granted bail in the sum of N500, 000 each with two credible sureties in the like sum.

The Magistrate further said that the sureties must also exhibit title documents of landed properties within the jurisdiction of the court and an evidence of tax payment in the last three years to the purse of Ogun State government.

“Bail is hereby granted to the first and second accused persons in the sum of N500, 000 with two credible sureties in the like sum, sureties to exhibit title document of landed property within the jurisdiction of this court. An affidavit of an evidence of payment of tax in the last three years, the prosecution should also verify the residence and place of abode of sureties,” the magistrate ruled.

Meanwhile, the magistrate advised the counsel to the third respondent,Kayode Akinsola to file a bail application at the High Court ,saying that Olabintan was facing a murder case which can only be adjudicated upon at the high court. [VN]