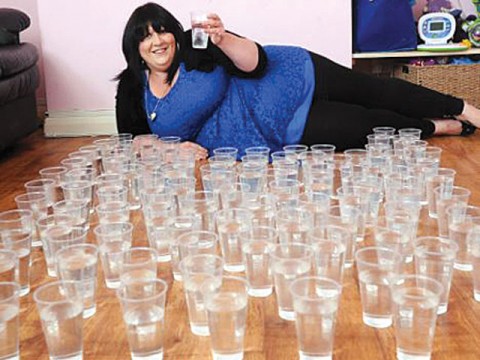 Water can be addictive too. It can also be deadly if you drink too much water.

A young mother is talking about her strange addiction to drinking water. She swallows up to six gallons of water per day. Sasha Kennedy, 26, has big bottles around her wherever she goes.

Because of her addiction, she has to use the bathroom 40 times a day, and she says she has left jobs due to lack of water quality.

The mother of two, who said she has no health problems, still wake up several times a night to drink water and go to the bathroom. Kennedy said that the habit is affecting her sleep, too. “If I feel that my mouth starts to get dry I have to get my next dose of water, but that’s all I can focus on,” said Kennedy.

“People never really think anyone can drink so much until they get to know me then they simply cannot believe their eyes. I feel thirsty all the time and almost always have to be drinking water. It is an addictive habit.

Kennedy, who lives in the U.K., has two children Reggie, 2, and Fraser, 1. She said she started drinking lots of water when she was just a child and could not stop ever since.

At the time Kennedy was 6 years old, her mother had to put a plastic jug full of water besides her bed. She said she got up during the night to refill the container. At age 13, she already was drinking up to three gallons per day.

Too much water can be dangerous because it can lead to water intoxication, or hyponatremia, in which there is not enough salt in body fluids outside the cells. Both conditions can lead to serious health problems and even death.