Microsoft on Tuesday announced a partnership with Chinese manufacturer Huawei to offer an affordably priced smartphone in Africa geared toward tapping into the continent’s exploding mobile market. 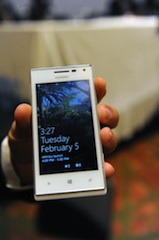 4Afrika smartphone Introducing the phone at an event in Nigeria, Africa’s most populous nation, a Microsoft executive said the aim was to have the 4Afrika phone priced at below $200. The Huawei phone model is not exclusive to the continent, but the 4Afrika version is being adapted to African markets, including with apps geared toward specific countries. At the Nigerian event, officials demonstrated apps including a dictionary for the local Yoruba language and local news.

There would also be an app related to the country’s popular low-budget movie industry, called Nollywood. “The key aspect of this is not price,” said Gustavo Fuchs, mobility director for Microsoft in the Middle East and Africa. “It’s really the content and the applications that we are working through our innovation pillar to make sure the phone becomes locally relevant.” On a corporate blog Microsoft’s top executive for the Middle East and Africa, Ali Faramawy, called it a “full-functionality Windows Phone 8 preloaded with select applications designed for Africa, by Africans.”

Huawei is known for building affordable phones, and the first in the series of the 4Afrika brand will initially be available as early as this month in Angola, Egypt, Ivory Coast, Kenya, Morocco, Nigeria and South Africa. Africa has been the world’s fastest growing mobile market — in addition to being home to the globe’s most rapidly expanding population. In countries such as Nigeria, landlines are almost non-existent, with infrastructure left to decay as mobile phones expanded. However, the high cost of smartphones, which can sometimes run over $700, has kept penetration of the such devices on the continent relatively low. Microsoft estimates that smartphone penetration in Africa is about 10 percent, while IDC research firm says sales of the devices accounted for 45.5 percent of total mobile phone sales globally last year. In Nigeria, the number of smartphone subscriptions has been put at some four million, with half of those Blackberries, which remain overwhelmingly popular in the country despite the brand’s sharp decline elsewhere.

A Blackberry is seen as a status symbol in Nigeria — and the brand has even spawned a Nollywood feature “Blackberry Babes.” Its free messaging service is especially popular. iPhone penetration in Nigeria has remained limited however, and Microsoft’s initiative could prove a boost to WindowsPhone8, a mobile operating system that has had difficulty gaining traction. Samples of the 4Afrika phone showed a touchscreen with a sleek design. The internal memory size and screen resolution are below those found in higher-end models but the phone sports a fast processor and two cameras.

Microsoft executives at the press conference Microsoft executives said the 4Afrika Initiative overall aimed to put tens of millions of smart devices into the hands of Africans and bring a million small and medium-sized businesses online by 2016. Microsoft added it was partnering with Kenya’s communications ministry and Internet service provider Indigo Telecom to deliver low-cost, high-speed wireless broadband access across Kenya using solar-powered base stations. It also said it had agreements with Safaricom in Kenya and Bharti Airtel in Nigeria to accelerate local adoption of the Nokia Lumia 510 and Nokia Lumia 620 Windows phones.