Amir Hefez, 34, an unsuccessful suicide bomber with a dozen sticks of dynamite hidden beneath his coat, was stabbed several times on a local bus in a botched robbery attempt near Hannover Square in London today. 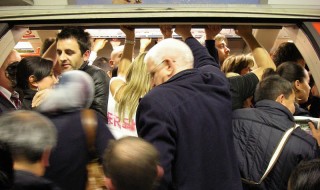 Mr Hefez was immediately rushed to a nearby hospital, where he remains in critical condition, London media reports.

Based on the testimony of witnesses, Mr. Hefez was attacked with a knife around 4 p.m. today while riding on bus 43. Mr. Hefez had engaged in a verbal conflict with a young man who attempted to flee the scene, but was later apprehended by police.

The incident occurred when the attacker, who has yet to be identified, attempted to steal Mr. Hefez’s backpack. The bomber was stabbed repeatedly when he tried to stop the theft.

For the British public, the case of Amir Hefez has some parallels with that of Jabalabdul Johnson, who had planned to hijack and blow up a plane on a flight between London and New York last year but passed out during takeoff due to his fear of flying, which caused him to remain unconscious throughout the entire flight.