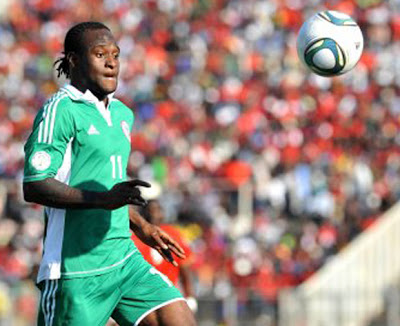 Victor Moses is fit again to star in Sunday’s African Nations Cup final, while Emmanuel Emenike could still play a part in the game, officials said.

Team spokesman Ben Alaiya on Sunday morning gave Moses the all clear after he recovered from a left ankle injury.

“I can say 100 per cent that Moses will play the final. He was sharp and quick in training yesterday (Saturday),” MTNFootball.com quoted Alaiya as saying on the issue.

The team official also disclosed that he would not rule out Emenike having a role to play during the game even though he has suffered a hamstring injury against Mali in the semi-final.

“He may not start, but he could still come in. He shouldn’t be ruled out completely, but in case he does not make it, we have capable replacements.

“Ikechukwu Uche was our leading scorer in the qualifiers and he could have a chance to prove himself as he has been mostly on the bench.

“We also have Ahmed Musa, who has also not been starting, and Brown Ideye.”

Keshi has said he would be willing to risk both Moses and Emenike if they are only 80 per cent fit.