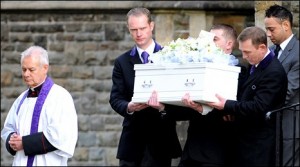 A couple didn’t know how to respond after finding their dead baby alive in a hospital morgue.

Five doctors at Perrando Hospital, in northern Argentina have been suspended for the declaration of a stillbirth and having the baby nailed inside a coffin and placing it in a cold room in the hospital morgue for 12 hours, the Argentina news media reported.

The boy, who was named Luz Milagros, or “Light Miracle”, was found in a coffin in the hospital in Chaco, a half a day after his birth.

“We were told the baby had hypothermia and that this may have weakened her heart, which was already low before birth,” said the baby’s father, Fabian Veron, who is 31 years old.

The baby’s mother, Analia Bouter, 29, who has four children, said she never had the chance to say goodbye to her child, since she was sedated during birth, which came three months early.

The grieving mother and father visited the hospital morgue 12 hours later. The couple was taken to a cold room and shown a small coffin that was nailed shut.

“My husband used a lever and opened the coffin,” said Bouter.

The mother, hoping to find closure, instead came face to face with her daughter, who was wrapped in a white blanket and it looked as if she was just waking up, the mother said. The baby stretched and let out a scream.

The mother of five children, said she fell to her knees. “This is a message from God, a miracle,” she told the news media.

Rafael Sabatinelli, the Assistant Secretary for Health of the province of Chaco, Argentina, told the news media, that his office had opened an investigation into the matter.