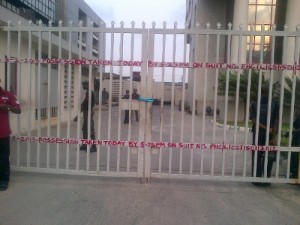 The embattled chairman of Bi-Courtney Consortium, Wale Babalakin had his woes compounded with the seizure of his property by the Asset Management Corporation of Nigeria (AMCON) over an alleged N13.5 billion debt.

The said property property located at 43A, Afribank Street, Victoria Island, Lagos, was taken over by a detachment of armed policemen and bailiffs of the Federal High Court, Lagos on Friday evening.

AMCON, while justifying its action, said it was in compliance with the interim orders granted by Justice Chukwujekwu Aneke against Roygate Properties Limited, believed to be owned by Babalakin.

The orders were sequel to an ex-parte application filed by the AMCON in a suit marked: FHC/L/CS/1501/2012. Copies of the orders made on February 5 were conspicuously pasted on the gates of the VI house.

Justice Aneke granted AMCON “interim possession of the property at 43A” Afribank Street, pursuant to a tripartite legal mortgage registered on October 14, 2010 between Roygate (the borrower), Stabilini Visioni Limited (surety/mortgagor) and Guaranty Trust Bank (the lender.)

The court further restrained Roygate, its directors, subsidiaries and sister companies from transferring or dealing with any of its funds in 20 banks listed in the application, or anywhere else up to the N13.5 billion allegedly owed by the company.

Justice Aneke restrained the banks from allowing Roygate to “operate any bank accounts” held by it in the banks.