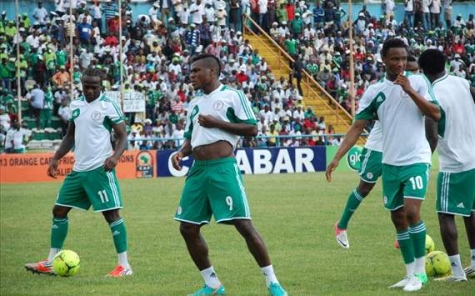 The Federal Government will make the present set of Super Eagles players the first inductees into the National Sports Hall of Fame.
Sports Minister and Chairman of the National Sports Commission, Mallam Bolaji Abdulahi, disclosed this on Thursday night while addressing players and officials of the team.  The Hall of Fame was recently approved by President Goodluck Jonathan.

The Minister, who spoke to the team at their Garden Court Hotel abode in Milpark, South Africa, also said that the government has mapped out a heroic welcome for the team next Monday.  He was accompanied to the event by the National Football Federation (NFF) President, Aminu Maigari and other important figures in Nigeria sports administration.

He described the pride of the government at the exploits of the team so far at the African Cup of Nations and urged them to complete the job by winning the trophy.

“Victory is not everything but victory is the only thing”, he declared, echoing American football coach Vince Lombardi as he challenged them to go all out for victory in the final against the Stallions of Burkina Faso in Soweto on Sunday.

The NFF President revealed that he has already received words from President Jonathan of another tele-conference with the team before the final, as the last one had highly motivated the players and the President feels they need his tonic to excel in Sunday’s grand finale.

Head Coach Stephen Keshi, spoke in a similar vein, noting that the team has come too far in the competition to let its guard down.

Skipper Joseph Yobo thanked the Minister for being there for his team, and assured that the team has resolved to unite and conquer the Nations Cup trophy for Nigeria.

“We will not let Mr. President who has been so supportive down and we cannot let our families and the people of Nigeria down,” he said.  “We are certain that the trophy will be won fair and square on Sunday.”

speaking today, midfield star, John Mikel Obi, declared that the strength of the Nigerian team is the togetherness and unity that have been missing in the squad in the past.

“We are together, united and playing for each other and that has accounted for where we are today. All credit must go to the coach who took a gamble on a very young squad, because I’m just 25 years old but am looking like the oldest in the team. This team will not only win the trophy on Sunday for the Nigerian people but will win many more trophies for a long time to come”.