Sir Alex Ferguson admitted Nani could give him more selection headaches if he continues to put in displays of the kind that helped Manchester United to a 2-1 victory against Reading and a place in the FA Cup quarter-finals.

The Portuguese winger came off the bench in the first-half to replace the injured Phil Jones and scored after the break before setting up Javier Hernandez for United’s second that proved crucial as Jobi McAnuff pulled one back for Reading.

“Nani’s got great talent and I had a feeling he would win the game for us,” said Ferguson.

“You could see he was right on form and he had two great strikes straight away and he was a threat to them the whole night.

“If he keeps that form up it makes my job even more difficult,” added the United boss whose side face QPR in the Premier League on Saturday as they look to maintain their 12-point lead. 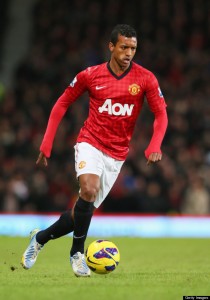 In the FA Cup, United will face the winner of Chelsea and Middlesbrough who play each other a week on Wednesday in their delayed fifth-round tie but Ferguson is unperturbed by which side makes it through as United have home advantage.

“We have a home tie and it can’t get any better than that. You can’t wish for anything more than that. No matter who we play, a home tie at Old Trafford means we have a great chance,” Ferguson beamed.

“This was a cup tie we got out of the road and now we have a big league game on Saturday at QPR and hopefully we can keep the momentum going.”

Nani replaced Jones just before the break as the defender hobbled off with an ankle injury after a challenge from McAnuff.

“We will have to assess it,” admitted the United manager. “It is an ankle injury so I would imagine he would not be ready for Saturday and we will see what he is like after that.”

Nani opened the scoring in the 69th minute when Antonio Valencia found him in the area and the winger, who was involved in a car crash in Manchester last Friday but unhurt, controlled with his left before rifling in with his right.

Adam Le Fondre had a shot saved by United keeper David De Gea moments later but almost immediately Nani sprinted clear down the right before crossing for Hernandez who bowed down to nod in at the front post.

That looked to be the tie wrapped up but Reading battled back and started to bombard the United area before a mistake from Chris Smalling nine minutes from time allowed McAnuff in to shoot low past De Gea.

Le Fondre headed over in stoppage time as Reading threw everyone including goalkeeper Adam Federici forward but United held on.

Reading now return their focus to Premier League safety and have a home game with fellow strugglers Wigan on Saturday to contend with.

“We have been learning in the Premier League and we now have 12 games, the first against Wigan on Saturday at the Madesjki,” said manager Brian McDermott.

“Everyone knows what a difficult place that is to come to and get a result.

“We have only lost three times there now, against Manchester United, Arsenal and Spurs. We have won the others and drawn. We are looking forward to our next one.”

Reading return to Old Trafford next month for a league fixture and McDermott is hoping this experience helps them for what could be a bigger fixture.

“It is the first time I have managed here and it was good for me personally and my players to come here. We have to come back here in the league and will know a bit more about what to expect,” said McDermott. [AFP]