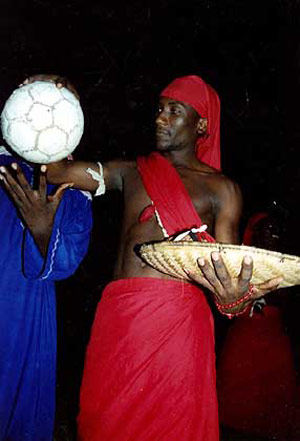 The subject of ‘juju’ seems not to be far away from the Black Stars camp anytime they come crushing out of major tournaments ala the AFCON 2012 in Gabon and Equatorial Guinea, where then Ghana Coach, Goran Stevanovic ‘Plavi’ came out to confirm the use of ‘black magic’ by some of his charges in camp.

This time though in South Africa, it seems the ‘culprit’ was outside who managed to sneak past security to the Ghana dressing room and was on the verge of sprinkling the concoction to do the ‘damage’ when he was allegedly caught and handed over to Tony Baffoe.

Speaking on the issue, Black Stars team manager, Sabahn Quaye, who himself is no shrinking violet when it comes to matters of that nature says he believes the yet to be identified person cast a spell on the Ghana team, leading to the loss against the Burkina Faso during the semi final clash.

Former Hearts of Oak stalwart, Sabahn says he believes in the existence of juju so as he put it, “anything could have happened.”

He says investigations are ongoing but he will do his possible best to get to the bottom of the matter.

“My friend, I have been in football for so many years so such things cannot be swept under the carpet. How that intruder managed to breach past security to get into our dressing room is a mystery. I will contact Tony Baffoe myself to sort things out,” he said.