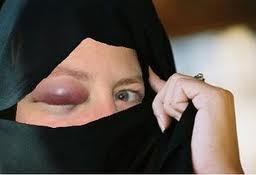 Nearly half Saudi women are beaten up by their husbands or other family members at home and many of them are hit by sticks and head cover, according to a university study published in local newspapers on Tuesday.
Surprisingly, the study found that the Bedouin men who still dwell the desert in the conservative Gulf Kingdom, are less violent than Saudi men in urban areas.

The study was conducted by Dr Lateefa Abdul Lateef, a social science professor at King Saud University in the Capital Riyadh. It involved female students at the university and some Saudi women covered by the government’s social security.

The study showed that nearly half those covered by social security and more than a third of the female students at the university are beaten up at home,” Dr Lateefa said.

“Husbands were found to be beating their wives more than others. They are followed by fathers, then brothers then sons…Hands and sticks were found to be used mostly in beating women, following by men’s head cover and to a lesser extent, sharp objects.”

The study showed that husbands beating their wives included both educated and non-educated men and that “those dwelling in the desert are less violent with their wives than those living in cities or villages.”

The study found that the main reasons for violence against women include poor religious motives, drug addiction and alcoholism, arrogance and a tendency to control, psychological problems, poverty, and unemployment.