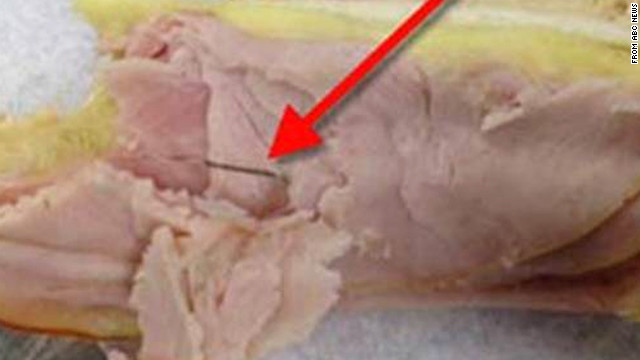 The last thing to expect inside a sandwich served on Delta Airlines is needles.
Delta Air Lines Inc. and the FBI, are trying to figure out how the needles got into turkey sandwiches served on board four flights from Amsterdam. One passenger was injured.
The airline said that what looks like sewing needles were found in five sandwiches. One of the passengers on a flight to Minneapolis was injured, but the passenger refused medical attention, according to Delta spokeswoman Kristin Baur. Other needles were found in two flights to Atlanta and one to Seattle.
The FBI office in Atlanta has opened a criminal investigation into the matter, the agency said in a statement.
Baur said the flight attendants stopped serving snacks as soon as the needle was discovered. Messages were left for other flights on the route from Amsterdam, where the sandwiches had been prepared by a caterer, to not serve the sandwiches. Another sandwich served in the Minneapolis flight also had a needle, Baur said.
After the needles were found, passengers had pizza instead. Baur said the security of the meal production has increased and it is using most packaged foods while the investigation continues.
“Delta is taking this matter very seriously and is cooperating with local and federal authorities who are investigating the incident. Delta has taken immediate action with our catering service in flight from Amsterdam to ensure the safety and quality of food offered on board our aircraft,” the airline said in a statement.
The sandwiches are made in the kitchen of Amsterdam Gate Gourmet catering company, and were to be served to business class passengers on Delta.