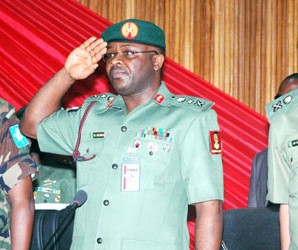 The Chief of Army Staff (COAS), Lieutenant General Azubuike Ihejirika in a press briefing in Abuja today said that officers and men of the Nigerian army under his leadership have enjoyed a steady rise.

Ihejirika said contrary to claims in some quarters, promotion exercise in the army have never been based on ethno-religious consideration but in line with laid down principles of merit and federal character approval from the army council which includes the president of the Federal Republic of Nigeria.

It would be recalled that a faceless group some couple of weeks ago following the retirement and promotion exercise conducted in the Nigerian Army, had accused General Ihejirika, of putting his kinsmen in key army positions even when they were not qualified for such positions, in addition to providing details of such postings and affected officers.