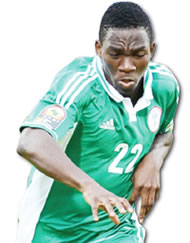 With the international careers of African stars like Didier Drogba, Seydou Keita, Lomana LuaLua, Joseph Yobo and others nearing their end, there are ready replacements, as a new set of younger players set the tone at the just concluded 2013 AFCON, reports’TANA AIYEJINA

A fast-paced, powerful striker with heading ability, athleticism and a fierce shot, Spartak Moscow’s Emenike was a huge revelation at the 2013 AFCON.

Emenike’s strength, hard work and resilience played a major role in the Eagles’ march to the final. He topped the scorers chart alongside Ghanaian Mubarak Wakasso with four goals.

He scored two goals against Burkina Faso and Zambia in Group C, and then scored a 30-yard free-kick against the Ivory Coast in the 2-1 quarter-final win, before striking again from another set piece against Mali in the 4-1 semi-final win, taking his tournament tally to four.

He’s been in top form this season in the Russian topflight, scoring the fastest goal in Russian Premier League history, after just 10 seconds.

His performances have caught the eye of top English clubs, Liverpool, Arsenal and Reading, who are all said to have sent scouts to watch the 25-year-old in action.

Togo’s forward Jonathan Ayite was impressive in South Africa as the Sparrow Hawks reached the knock-out stage for the first time. One goal in his first two appearances was a good return for a player who has been in and out of struggling Brest’s first team in Ligue 1.

The 27-year-old scored the equaliser in an unlucky opening defeat to Ivory Coast and was lively throughout before Togo crashed out. Ayite looked good partnering with Tottenham’s Emmanuel Adebayor and his new-found form may just captivate him into bigger things in club football in Ligue 1, where he is in need of first-team football.

Traore almost didn’t make it to South Africa because of injury. But sadly after leading Burkina Faso to their first Africa Cup of Nations victory and knock-out stage qualification since they reached the semi-finals on home soil in 1998, the player suffered a thigh injury was ruled out for the rest  of the tournament.

With three goals in two appearances (one as a substitute) against Nigeria and Ethiopia, Traore’s electric showings in the 2013 edition brought him to the attention of a host of clubs until injury kept him out.

Despite just scoring twice in the Stallions’ march to the final, Pitroipa was a big factor behind Burkina Faso’s superb form.

His deft footwork was vital, giving defenders  headaches in all the games he played. The 26-year-old’s powerful, near-post header against Togo in extra time gave Burkina Faso the ticket to the semi-final against Ghana.

But he was controversially shown a red by Tunisian referee Slim Jedidi for simulation in the semi-final clash against Ghana, but video replays showed he was brought down in the Ghanaian box. The which attracted global criticisms and CAF reversed the decision.

Ryan Mendes was at the heart of Cape Verde’s success in South Africa. Before the 2013 AFCON started, little was expected of Lille striker Mendes, and even less from hitherto minnows Cape Verde. But after their quarter-final exit to Ghana, Mendes emerged as one of the better-established stars of the side and a talismanic presence despite his 23 years of age.

It was his pass for Platini’s goal that allowed the nation of just over 500,000 people to score their first-ever goal at the tournament against Morocco. It was also his late charge into the Angola defence that set up Heldon’s dramatic winner that sealed qualification into the last eight.

The 22-year-old midfielder became Ghana’s latest sensation after his goal saw Ghana beat Cape Verde 1-0 in a friendly match played in November on his international debut.

The Espanyol player scored four goals in the tourney and could have won the top scorer’s award outrightly but he fired his penalty kick high and wide in Ghana’s third-place match against Mali. But he is one of the new stars Ghana can count on for the future.

The debutant found the back of the net three times from the spot and another from open play in six games.

Wakaso scored from the spot in the second group game against Mali, converted another penalty against Cape Verde and added another in open play against the Islanders before bagging his last from the spot against Burkina Faso.

Chelsea winger, Moses, brought in a lot of vitality and vibrancy into Stephen Keshi’s side. Though yet to adapt fully to the physical nature of the African game, the youngster was crucial to Nigeria’s success in the competition.

First he earned two penalties and scored both in the 2-0 win over Ethiopia to help the Eagles advance to the quarter-final. After causing heartaches for the Ivoiriens in the last eight, he beautifully set up Elderson Echiejile and Brown Ideye for Nigeria’s first two goals in the 4-1 rout of Mali in the semi-final.

But he copped an injury thereafter and had an above average performance in the final match.

The absence of ageing captain Joseph Yobo was not felt in the centre of Nigeria’s defence, thanks to youngster Omeruo, who impressed at the AFCON.

The 19-year-old Chelsea centre back currently on loan at Den Haag in the Netherlands, has been in fine form for club and country, with reports claiming he could be in line for a recall to Stamford Bridge.

His combination with another equally inexperienced centre-back Godfrey Oboabona was amazing. Against Ivory Coast, there were fears about Omeruo curtailing superstar Didier Drogba.

But he proved critics wrong, playing the full 90 minutes in the 2-1 defeat of the Elephants and did an excellent job in keeping Drogba out.

The story of the 2013 AFCON will never be complete without a prominent mention of home-boy, Sunday Mba. Eagles coach Stephen Keshi was heavily criticised for including the Warri Wolves midfielder alongside five other domestic league players in his squad for the competition.

However, Mba led the home-based players in proving their critics wrong, and scoring the Eagles’ two most important goals of the competition.

First Mba put paid to the ambitions of Ivory Coast’s Elephants, hammering in an individual effort that gave the Eagles a shock 2-1 win over the Ivoirians in the quarter-final. He also won the man-of-the-match award.

Ogbuenyi, as he was nicknamed after the win over the Elephants, then rose to the occasion in the final, scoring from a difficult angle to help Eagles beat the Burkinabe 1-0 and win the Nations Cup title for the third time.

In scoring that crucial goal, the 24-year-old displayed great ball control with a right-footed juggle and a left-footed finish, to end Nigeria’s 19-year wait for the title.

Twenty-year old Lazio midfielder, Onazi, has shown that you don’t ned the physicality of Fegor Ogude to do a good job in the middle of the Eagles team.

The Italy-based player brought back memories of Sunday Oliseh with his timely tackles, accurate passes and his ability to keep a cool head while discharging his duties.