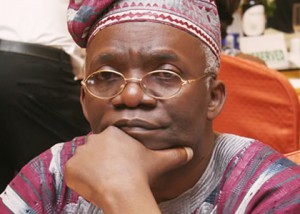 Human rights lawyer, Mr. Femi Falana (SAN) has stated that lawyers and judges should be blamed and held responsible for the subversion of the judiciary and the rule of law in the country.

The Lagos-based lawyer considered the high rate at which the rule of law was being subverted in the country and lamented that lawyers had joined the reactionary forces that are pulling down the country through unethical practices: “The situation has got to a level of anarchy and if nothing is done drastically to halt this decline, the country may collapse”, the activist stated.

In a lecture titled: “Nigeria, a failing nation: Where are the lawyers?” which he presented at the eighth Chief Olusola Babatunde Benson (SAN) annual public lecture organised as part of the programmes for the 2013 Law Week of the Nigerian Bar Association (NBA), Ikorodu branch, he stated that it was regrettable that members of the bar were now assisting in pushing the country to the precipice of self annihilation and subsequent chaos by manipulating the laws to favour the rich, adding that what existed in the court today was a sham.

He further pointed out that the systemic decline and rot in the judiciary had become so endemic that it had become almost impossible to get justice in the country: “Judges as well as lawyers oftentimes exploit the complexity in the Nigerian legal system to abuse the court process, thereby inhibiting justice,” he declared.