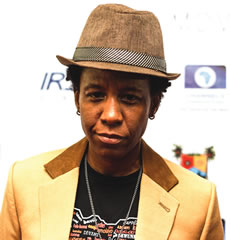 The name Shola Idowu may not immediately ring a bell but at the mention of Weird MC, songs like Allen Avenue and Ijoya come to mind.

She said, “They let me know about their element of fear; maybe because of how I relate with a lot of them and because of my demeanour they find it so easy to approach me. They tell me that it is a male dominated industry and I agree with them. It is not just peculiar to Nigeria; it is so in a lot of industries in the world. It is about you striking out and believing that you have to stand out.”

Citing herself as an example, she said she had to fight her way to the top back then when the industry was dominated by men.

“I use myself as an example, Allen Avenue came out from nowhere and it became a huge success. Then I took my time and I came up with Ijoya. I was standing side by side with the male artistes and I was doing major shows. I tell them that they need to work hard.

“ This is not a business where you have to be timid, neither will things be handed to you. You have to stand up and earn your place. I tell them, it is not just about your nails and Brazilian hair, it is about content. If you do not have the content, you will never get the recognition and respect that you deserve. If you stay timid and at the back of the line, no one will ever recognise you.

“I talk to them sometimes on the phone. I have had an experience with one of them; I attended a show and she got booed and started crying. I told her that even if she had to cry, she should do it in private. I do not want to see her cry, it is awful already. You are giving me a very negative perception about your brand.”

She stated that she learnt a major lesson from the success of her song, Ijoya. She learnt that music is all about business.

The weird one said, “Ijoya opened my eyes. It showed me that you cannot relegate yourself to the background in terms of how you express yourself. If you read my biography, it says, you cannot put me in the box. If you do, you will have to break the seal again. At best, I call my music fusion. I can toy with any style from Apala tojuju, classical, anything. That is the kind of artiste I am. I tell them you have to open up to new possibilities.

“A lot of rappers are uptight. A lot of people accused me of selling out after Ijoya came out. They said I broke their heart that they were looking at me as a rap artiste, a torch for women.  I told them that it is a business. I came to the realisation that I love what I do but it is a business.

“It is what pays my bills. I have responsibilities. No mother, no father, I am the senior one at home. I have junior ones to take care of, school fees to pay. I have things to do. That is what I say to them.”

Weird MC is a also judge on a new initiative created by Ultima Studios. The competition, U-Rap, she said, is a way of making rap prominent in Nigeria.

She explained, “Why I am part of U-Rap is because I have a close relationship with the organisers. I am working on some new projects right now, but I don’t want to let the cat out of the bag yet. It is part of me diversifying the Weird MC brand. I was called and they told me about the competition which is majorly done online. I thought that since we have had a good rapport over the years, why not join them.

“As it was is, it is going back in time. I feel the U-Rap competition will impact positively on the industry. So far, it has been myself, Illbliss, Mode9, Ruggedman that have been pushing rap. Now we have the likes of MI, Naeto C, Phenom, Muna, Zee, Eva, Sasha, Olamide.

“ I think Mo’Cheddah has a better understanding of the market with what she has done so far. I am working on my new album and I put female rap artistes on it. It can only get better.”