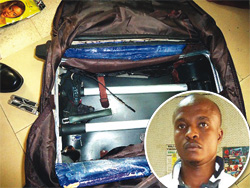 A Nigerian student studying in Malaysia, Vitalis Dike, has been nabbed by the National Drug Law Enforcement Agency for drug trafficking.

Dike was arrested at the Murtala Mohammed International Airport, Lagos, during the screening of outbound passengers for Malaysia via a Qatari flight.

The 31-year-old suspect who was arrested for being in possession of 1.430kg of methamphetamine could have faced the death penalty had he been caught in Malaysia with the drugs.

A native of Orlu, Imo State, Dike said that he was promised $4,000 to deliver the drugs in Malaysia.

“I was asked to take an empty bag to Malaysia and in return get $4,000 but when I got to the airport, the drug was discovered” he said.

Confirming the arrest, NDLEA Airport commander, Mr. Hamza Umar, said the drug was industrially packed in such a way that the agency had to cut the sides of the bag open with a knife to discover the drugs.