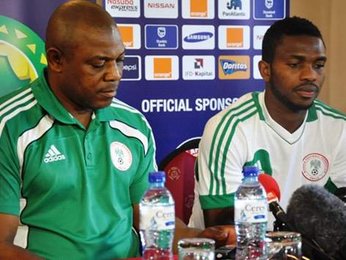 Super Eagles coach, Stephen Keshi, has condemned Nigerians for what he described as a lack of adequate support for his team before the Eagles game against Elephants of Ivory Coast on Sunday.

Speaking during an interview after the game, Keshi said, “I thank the players, Nigerians and all those who criticised the team. They all contributed to the victory we had today. The big challenge we have is that Nigerians do not believe in the home-based players but I do. I believe if they are given the opportunity they’ll play much better. The problem is that in Nigeria, where I come from, we’re not patient with the home-based players.”

Keshi also said that he had no doubt that Nigeria would win, even after the Eagles conceded the equalizer. The coach also tried to avoid singling out any individual player as hero of the game: “It wasn’t about individual game; we just wanted to win the game. It wasn’t just Sunday Mba who was the hero; everyone in the team was a hero. Mba scored the golden goal, and I’m just so happy. Maybe I have to give him a kiss if I see him,” Keshi said.

“What is important is that we are progressing everyday and I hope that we will keep growing that way. Nobody gave us a chance to beat the Ivorians because of their quality but we have done it today.” While assessing the opponents, Keshi noted that although Nigeria won the match, it was a difficult game for the Eagles.