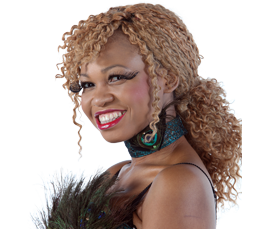 If you are still getting to know about the news of the passing on of the Nigerian musical artiste, Oluwabimpe Susan Harvey, popularly known as Goldie, then you are either too busy in your work or travelling thousands miles by road; or simply put, you are not a fan of the Nigerian music entertainment industry.

The 31 year old singer who represented Nigeria last year at the popular TV reality show Big Brother Africa (BBA) last year died recently at Reddington Hospital in Victoria Island after landing from the USA where she attended the Grammy Awards which held on Sunday along with duo of Kennis Music Kenny Ogungbe and Dayo Adeneye. Maverick TV presenter, Denrele Edun, is very prominent to be among those that were with the deceased in her last moments.

While the wait for the autopsy result expected to be carried out to ascertain the cause of death lingers on, so many writers, bloggers and journalists have turned to speculating what the cause of death might be; I have written one and suggested it may be Thrombosis, a condition leading to the formation of a blood clot inside a blood vessel thereby obstructing the flow of blood through the circulatory system.

That is not the only suspicion for the cause of death; sources from Reddington hospital where Goldie died last night postulated Pulmonary Embolism while what would be regarded a “negative” revelation made headlines in the publication, PM News, which claimed she may have died as a result of doping complications. Well, the good development is that an autopsy will be carried out as it is necessary as contained in the laws guiding Lagos State where she passed on but whether the result will be made public will be another issue to be dealt with. With the kind of influence being wielded by some music labels over the entertainment writers’ leaves one to be afraid that should the autopsy report prove otherwise, chances that it would be reported credible are slim; there is bound to be conflicting reports.

Traditionally, as no evil is not supposed to be said about the dead, the media show do what is right; you decide that.

Goldie is dead and she will be remembered in the coming weeks, months and maybe the rest of the year by some friends, fans, colleagues and all sorts but be sure that the government will in no way be among those that would be visible in this category.

First among what you will start noticing and which has started is that Goldie’s twitter account would have more followers; her Facebook page would witness more likes to the extent you will start asking; where the hell were all these people? As of the time of penning this piece, it stood at 86, 610 and still counting.

Many will post some ugly tweets and make reference to her BBA moments and also try to measure her career in the negative but, she will have fighters that would attack every silly comment; trust artistes, they protect their own.
If Google could be kind enough to furnish us with the frequency of downloads and searches done on Goldie since the announcement of her death, then you will see that Goldie became more popular in death than she was when she was in the Big Brother House.

Her picture has since replaced those of many as display pictures (dp) on Blackberry Smartphone’s BBM app and her songs and interviews have hit the highest since she came on stage as an artiste in both print and electronic media including the internet not to talk of ringtones across Nigeria.

Her albums will start selling and Alaba marketers may have started mass-producing the albums including the present three singles from her forthcoming African Invasion album entitled Skibo, Miliki and Got to Have it; the pirates are already seeing a gold mine in Goldie’s work and they will surely smile to the bank and rob her of her royalties.

The regulatory bodies for copyright infringements will send their investigators and collectors out to all hotels, joints and relaxation spots with calculators and all to start tabulating the amount accruing from the airplay of her songs which has risen astronomically since her Valentine Day demise.

Fellow artistes are already trying to get their voices heard with tributes for her and they would be calling themselves and planning on a splendid way to have a befitting burial ceremony; a committee will be formed, Nollywood stars of course will be involved and they may toy with the idea of visiting the Ekiti State governor to donate some fund towards what they may call A Golden Farewell to Goldie.

The artistes are all going to start recounting their relationships with Goldie and then, you will see some collabo videos staring Goldie that may have been dropped some years back on your entertainment channels. Also, tribute songs especially in the form of singles will soon start hitting the airwaves and the lyrics will speak so much of what an Angel Goldie was; the kind of praises always reserved for the dead never for those living.

The media is already digging and will keep nosing. Soon stories about Goldie’s escapades in the BBA would dominate the stage and the main focus will be Prezzo who she was romantically attracted to and said officially that she was in love with. Then, more stories will come out; soft sells will be digging and they would be asking a question nobody ever asked; who is Leo Harvey? A brother, a husband? I rather not go there.

Then would be some music video collaboration by artistes in tribute to Goldie; it may be haphazardly done and presented and some of the stars would sing about their love for Goldie and all she did not do for them while alive.

The burial will be a celebrity show; whether in Lagos or her home state of Ekiti State. It will sure be a show for the best of the best in the industries. All class of artistes will be there whether A,B,or C-List and wannabes will not be left out. Goldie might have a golden casket and be sure to see some ladies that would dress up like her; blonde hairs, extra long eye lashes and tight fitting diva apparels, just to immortalize Goldie.

Tears will flow definitely, Denrenle would cry, Omawumi too; Don Jazzy would be too moody to show his emotion while Banky-W will appear on black with his EME crew. Don’t be surprised if you see Kenny Keke Ogungbe and Dayo D1 Adeneye shed tears; she was signed to their record label and they were together at the 55th Grammy Awards held in Los Angeles some days before her death. Posters of Goldie will fly across Nigeria and some parts of Africa and her blonde hairstyle will be immortalized with her name; Goldie.

Many music award organizing bodies will give her post-humous awards and maybe some corporate bodies may try to do a movie about her and her diva nature; I am lost for a title but something like The Golden Diva will sure be considered.

The reality show she was planning to roll out next month called, Tru Friendship alongside Denrele and Kenyan housemate Prezzo, who have since departed Nairobi to Nigeria, might still stand a chance to see the daylight; somebody gotta have a mind to keep the dream alive. She wanted to launch it next month.
Goldie will remain in the hearts of Nigerians as one young lady who came and did her thing; she may not have been the best but she did give her best. In any way you may have perceived her, take a moment of silence and celebrate her life. She was indeed golden.