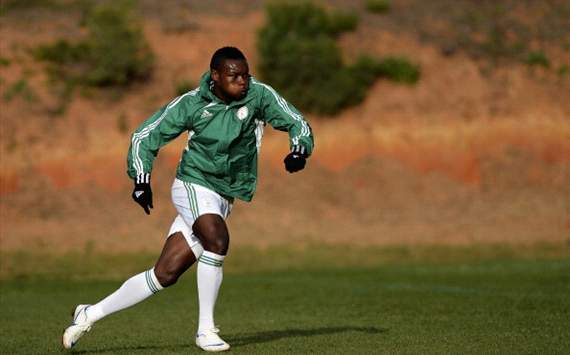 The family home of the Oboabonas in Ondo Town was packed full of guests as they watched the final of the Africa Cup of Nations last Sunday. Neighbours gathered in the small house to cheer Godfrey to victory as he lined up for the Super Eagles against the Stallions of Burkina Faso. His parents Jonathan and Victoria looked anxious throughout the encounter. They screamed and shouted every time their son was shown on the TV screen. They prayed at every touch and every move he made. At the end of the day, they screamed and hugged each other as their son emerged winner with the Super Eagles. It was a very emotional affair as the parents shed tears of joy for their son’s success.

It is noteworthy that Oboabona is from a family deeply rooted in sports. His immediate elder brother, Daniel is a member of the national senior male volleyball team while the second child of the family, Sunday was a former sprinter. And David, the third child plays cricket as a batsman. His father also played football as a young man.

After the victory, Shina Oludare spoke with the parents who also shared old family photos. Excerpts below:

Congratulations Ma on your son’s gold winning achievement, how does this make you feel?

Thank you so much. I am the happiest person on earth. I feel fulfilled as a mother of a footballer celebrated all over the country. I saw this coming, but never knew it was going to be this early. I give God the glory. God bless Nigeria for giving my son this chance to represent his country at this big stage.

So, could you please tell us how Godfrey started his football career?

My son started playing football at the age of two, he would kick anything spherical in the house. When we realized this interest in him, we bought him balls, even his friends would join him to play in our compound, and I must tell you that most times, he would sleep with the balls. He played for his primary school Adeyemi Primary School, Ondo. He later captained his secondary school, St James’ Catholic Grammar School when he was in JSS2. Then he joined Sunshine Stars after a brief stay with Rising Stars Football Academy.


Was there any point in his youth when you discouraged him from playing?

At all, I never tried it. Godfrey is destined to play football, so I am always happy seeing him play. When you look at this family, we are all sports men and women. His father played football when he was young, his immediate elder brother is a member of the national volleyball team, even my third son plays cricket as a batsman. Sport runs in the family and we are happy about that.

So what were the challenges raising him to stardom?

As a rookie, we would get him all forms of kits and boots that suited all playing conditions. I think when you calculate all he spent on kits alone, that is a whole lot of money. Most times when he sustained injuries, I would go through sleepless nights to see it got healed. The challenges are so numerous but I thank God that the rest is history today.

How did feel when he was first selected to play for Nigeria?

Woah! I was very happy. I never believed it. I danced round almost all the streets. It was dream come true for my son because he dreamt putting on the green and white jersey and he achieved it against all odds. I will like to thank Stephen Keshi at this juncture for giving him this golden chance.

Since his debut as a Super Eagles player, how has it been?
I feel very good and proud. I must confess that everyone in our neighborhood and beyond now wants to associate themselves with me which has not been the case before. People would stop whatever they are doing to say hi to me. They make me feel like I am the President of America (laughs).


What do you think has led to his meteoric rise?

It’s all about God. I’m the praying type. I never ceased praying for his success. Apart from this, Godfrey is a hardworking type. He would never relent to achieve what he wants to achieve. Another key to his progress is his humility.

Any message for Nigerians?

God bless Nigerians for their support. May God never let them down. I also thank all his coaches right from childhood. God bless you all.