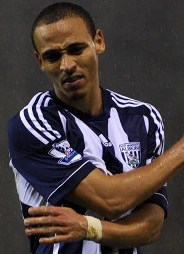 Osaze Odemwingie has finally issued an apology to West Bromwich Albion and the club’s supporters for his recent outbursts.

Osaze has also accepted the club’s unspecified sanction for his Twitter rants on Albion fans as well as trying to force a transfer deadline-day switch to QPR.

“I understand how my actions have been viewed and want to apologise to the club and our supporters for any distress I have caused.

“I want to reassure everyone at the club and our fans that I will continue to give my all whenever I am selected. We have enjoyed a good season so far and I aim to play my part in keeping the club as high up the table as possible,” said the Nigerian striker.

His apology has been accepted by Albion’s chairman, Jeremy Peace with the forward now expected to join up with the club’s first-team and could be available for selection again.