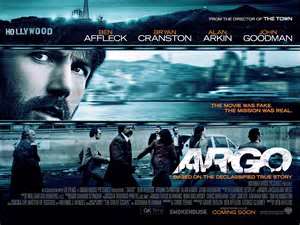 “Argo,” which was an Oscar also-ran before it caught fire and won practically every guild and organization award available, took home the big prize at the 85th Academy Awards Sunday night: best picture.

Ben Affleck, who was overlooked for best director, graciously thanked everybody from directing nominee Steven Spielberg to the country of Canada in his acceptance speech.

Then, after rushing through his thank-yous rather manically, suddenly got emotional. “I had no idea what I was doing. I was really just a kid. I never thought I’d be back here,” he said of his screenwriting win 15 years ago. “It doesn’t matter how you get knocked down in life. All that matters is you’ve got to get up.”

She got a burst of applause as she walked to the stage, almost tripping on her long dress as she approached the stage.

“This is nuts! Thank you to the Academy and thank you to the women here,” she said, practically gasping. “Happy birthday, Emmanuelle!” she added for 86-year-old Emmanuelle Riva of “Amour,” a fellow nominee.

Daniel Day-Lewis won his third best actor Oscar for his performance as Abraham Lincoln in “Lincoln.” He’s the first to win best actor three times. The audience gave him a rousing cheer as he looked over to presenter Meryl Streep.

“It’s a strange thing, I had actually been committed to play Margaret Thatcher, and Meryl was Steven’s first choice for Lincoln,” he said to laughter. “I’d like to see that version.” Streep won best actress last year for playing Thatcher in “The Iron Lady.”

Ang Lee won the Oscar for best director for “Life of Pi.” His film earned four Oscars, the most of the night.

“Thank you movie god,” he said, praising “all 3,000” people who worked on the movie with him — as well as Taiwan, where some of the film was shot.

A win for Bond

After five decades and countless hit theme songs, one of them finally won best song at the Oscars: Adele’s “Skyfall,” which she co-wrote with Paul Epworth.

Quentin Tarantino won best original screenplay for “Django Unchained.” “This will be the writers’ year, man,” he said, praising his fellow nominees.

Anne Hathaway won best supporting actress for her performance as the doomed Fantine in “Les Miserables.”

“It came true,” she said, gazing at the trophy.

After several heartfelt thank-yous, she looked at her husband of six months, Adam Shulman, sitting in the audience. “Far and away the greatest moment of my life was when you walked into it.”

For the most part, the 85th Academy Awards have been a fairly low-key affair. However, high notes have come from musical performances.

Shirley Bassey, the original James Bond hit singer, dazzled with a version of “Goldfinger.” Soon after, Jennifer Hudson raised the roof — and got a standing ovation — for a remarkable version of “And I Am Telling You I’m Not Going,” from “Dreamgirls.” Hudson won an Oscar for playing Effie, who sings the song, in 2006’s film version. Adele sang her James Bond theme song, “Skyfall,” and Barbra Streisand sang “The Way We Were” for co-writer Marvin Hamlisch, who concluded the “In Memoriam” segment.

The Oscars also had an unusual occurrence — a tie. It’s happened before — Katharine Hepburn and Barbra Streisand famously tied for 1968’s best actress — but it’s rare enough that presenter Mark Wahlberg was caught off guard.

This year’s tie was in sound editing, with “Zero Dark Thirty” and “Skyfall” sharing the honor.

Christoph Waltz, who played a bounty hunter in “Django Unchained,” won the first award of the night, best supporting actor.

“My unlimited gratitude goes to Dr. King Schultz — that is, his creator and the creator of his awe-inspiring world, Quentin Tarantino,” he said. Schultz was his character in the movie.

Tarantino is up for original screenplay, though not best director. The film is up for best picture.

Host Seth MacFarlane showcased a casual affability that, at times, made him seem more like a guy in your living room telling jokes than an Oscar host. His opening was uneven, but if audiences were worried about off-color jokes, they found little to offend them — except, perhaps, for one remark: describing the violent “Django Unchained” as a “date movie” for Chris Brown and Rihanna.

“This is what we were afraid he’d do,” MacFarlane said as an aside. A later crack about Abraham Lincoln led to groans and the remark, “A hundred-fifty years, and it’s still too soon?”

The early jokes were quickly interrupted by William Shatner, in costume as “Star Trek’s” James T. Kirk, telling MacFarlane what he could do to improve headlines from the future stating he was the “worst Oscar host ever.” The suggestions included a handful of song-and-dance numbers, though there was also a performance of the movie “Flight” with sock puppets. MacFarlane demonstrated a fine singing voice — though anybody familiar with the musical numbers in his animated TV shows already knew that.

MacFarlane’s jokes got sharper as the show went on. Welcoming Michael Douglas and Jane Fonda to give the best director honor, he quipped, “They remember when this town was cocaine trees as far as the eye can see.”

“My taste aside, this is a great show for people who love Seth MacFarlane and musical theater. Which is pretty much Seth MacFarlane,” tweeted Time’s James Poniewozik.

The actress was as excited as a child on Christmas morning as Morgan interviewed her. “I’m at the Oscars!” she exclaimed. The performer is up for best actress for her turn as a single-minded CIA officer pursuing Osama bin Laden in “Zero Dark Thirty.”

Aside from Chastain’s stunner, one of the more interesting outfits was worn by a man: that of Mark Andrews, the director of the Pixar film “Brave.” In honor of the film — about a champion Scottish archer who saves her family — he was wearing a kilt. The tartan pattern has been registered and the attire is available for purchase, he told Morgan.

Lawrence, who’s up for best actress for her performance in “Silver Linings Playbook,” was wearing a flowing white-and-pink Dior number.

She refused to put on airs, however. Told by Morgan that people are saying she’s one of Hollywood’s rising stars, she laughed off the compliment.

“Are you sure that’s not just my mom?” she replied.

Fashion, of course, is as big an attraction as the films themselves on this, Hollywood’s biggest night, when “Who are you wearing?” becomes as commonplace an utterance as “The Oscar goes to …”