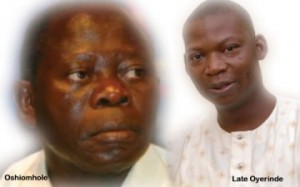 Chief Judge of the Federal High Court, Abuja, Justice Lawal Gummi, has condemned the conflicting investigation reports of the police and the State Security Service (SSS) on killers of Mr Olaitan Oyerinde, the principal secretary to the Edo State governor, Adams Oshiomole.

Speaking at a conference on Speeding Up Criminal Justice, organised by the Department for International Department (DFID) and Prisoners Rehabilitation and Welfare Action (PRAWA), Justice Gummi said there was lack of coordination in the criminal justice sector.

According to him, “in another breath, the recent case of the murder of Olaitan Oyerinde, the principal secretary to the Edo State governor, leaves us with a sour taste in the mouth. It was a bewildering case of one murder, two government agencies, and different culprits… The police and the SSS, the two security agencies investigating the murder, paraded two different sets of suspects, a development that has set off speculation that investigations into the murder was most likely bungled.

“While the Edo police command paraded some suspects, including a human rights activist, the SSS flaunted an entirely different set of suspects (which it labelled robbers) at its Abuja headquarters… Is this kind of embarrassing scenario possible if we had effective coordination between the police and the SSS?”