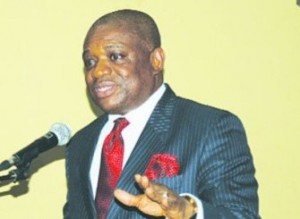 A former governor of Abia State and founding member of the Peoples Democratic Party (PDP), Dr Orji Uzor Kalu, has hailed the emergence of Chief Tony Anenih as the chairman, Board of Trustees of the party.

In a statement he signed on Tuesday, Kalu described Anenih as a political emeritus, whose contributions to the party as the BOT chairman would be innumerable and immeasurable. He said the reconstitution of the BOT of the PDP could not have come at a better time than now that the other parties are forging alliances to push it out of power, especially at the federal level.

Kalu’s words: “I could not have expected a better decision at anytime other than now.” And speaking on Anenih’s abilities he said: “Over the years, you (Anenih) have come to be known as Mr Fix it. This is not because you rigged elections or engaged in other sharp practices. You have simply been able to fix things because of your openness, accommodation of all shades of opinion, willingness to bend over backwards in extreme situations and courage to speak truth to power.

“Please carry on in this spirit, as this is what is required at this period of great political turbulence… A man of your capacity is needed by the PDP now to move into the 2015 elections and come out of it successfully and unscathed.” He then appealed to all members of the party, including those holding political positions, to assist Anenih in the onerous task by cooperating with him.