Chairman of newly formed PDP Governors’ Forum Governor Godswill Akpabio of Akwa Ibom state has revealed that dangers of a looming implosion, treachery and emergence of Judases within the PDP necessitated the formation of the forum. 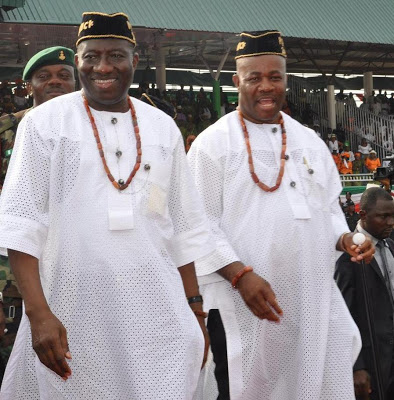 Akpabio, who was at the party’s national secretariat in Abuja on Tuesday accompanied by his Bayelsa State counterpart, Seriake Dickson, said the party was on a house cleansing mission.

According to him, the numerous challenges confronting the ruling party forced the leadership to look inwards in a bid to put its house in order, stressing that the party never envisaged such challenges in the 14 years of its existence.

He said: “Today we are facing challenges. There is implosion in the party; there is treachery and we now have more Judases than disciples. What the PDP is doing is to cleanse its house. It is a moving train that will crush anyone that stands in the way.

“We will put our heads together in the PDP Governors’ Forum to promote the unity and progress of the party. We will not be fighting the government because we will be working in solidarity of the party.

“The formation of the Forum is to look inwards and project the party and the government. We are doing self cleansing. We can assure everyone that the Forum is not above the National Working Committee of the party. The Forum is subordinate to the party” he added.

Akpabio who also declared that the PDP was not in a hurry to vacate governance at the national level, dismissed insinuations that the PDP Governors’ Forum was meant to weaken the powerful Nigeria Governors’ Forum, saying that it would rather strengthen and hasten its activities.