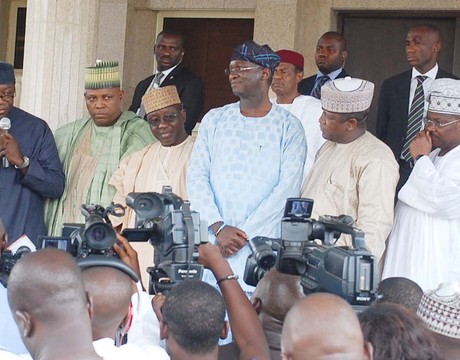 Contrary to the indifferent posture put up by the Peoples Democratic Party in the face of the on going merger talks by opposition political parties in the country, Information Nigeria has learnt that the party is actually wary of the threat of a united and focussed opposition and has begun sinister moves to throw spanner in the works.

It was learnt that the ruling PDP with the active connivance of the Presidency may have moved to frustrate the merger plans which has already given birth to the All Progressive Congress (APC), by funding a splinter group within the leadership of the ANPP.

At a meeting said to have been held at the instance of the Presidency two days ago, former Governor of Borno State, Ali Modu Sheriff, was believed to have met with Vice-President Namadi Sambo where plans were fine-tuned on how to truncate the membership and full participation of the ANPP in the new APC.

The newly formed APC is a coalition of four major opposition parties namely; CAN, CPC, APGA and ANPP.

Sheriff, who is currently the Chairman Board of Trustees of the ANPP was said to have agreed on a plan to convince party chairmen at the state level to work with him on the plot.

“The chairmen are to be handsomely rewarded financially for their role. Anytime this week, Sheriff and the ANPP chairmen already assembling in Abuja to hold a press briefing to reject the participation of ANPP in the merger thereby precipitating a leadership crisis in the party in a similar manner the APGA is currently doing,” a source said.

However, ANPP stalwarts  like former Kano State Governor, Ibrahim Shekarau, Senator Sani Yerima, former Governor of Zamfara State, and other prominent chieftains of the party are in the forefront of the merger plan and have purportedly vowed to stop Sheriff in his tracks.