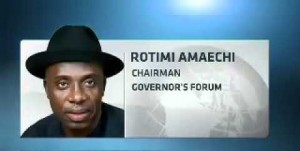 The Peoples Democratic Party (PDP) has announced the formation of a new forum made up solely of elected governors under the party. This, obviously, is a move apparently targeted against chairman of the Nigerian Governors’ Forum (NGF), Governor Rotimi Amaechi of Rivers State.

Governor Godswill Akpabio emerged as the chairman of the new forum at a meeting in the Presidential Villa presided over by President Goodluck Jonathan. Amaechi, who has recently faced discontent over his leadership style in the NGF, attended the meeting but left before it ended for undisclosed reasons.

The National Chairman of the party, Dr. Bamanga Tukur, presented Akpabio to State House correspondents after the meeting, saying cheerfully that Akpabio had been elected the chairman of a brand new PDP Governor’s Forum. And while addressing news correspondents, the Akwa Ibom governor said the forum was a bloc inside the NGF and was borne out of the need for PDP governors to speak with one voice. He said however that the new forum was distinct from the NGF.

With the formation of the PDP Governors’ Forum, the influence of the NGF and its chairman is expected to reduce as the PDP governors make up the majority of NGF’s member. The forum is thought to have been split into two following dissatisfaction by a number of the governors over the leadership style of the chairman and Rivers State Governor, Rotimi Amaechi.