An image of a brown Barbie doll has surfaced on the Internet, causing people to question whether or not it is supposed to be the next African-American Barbie. 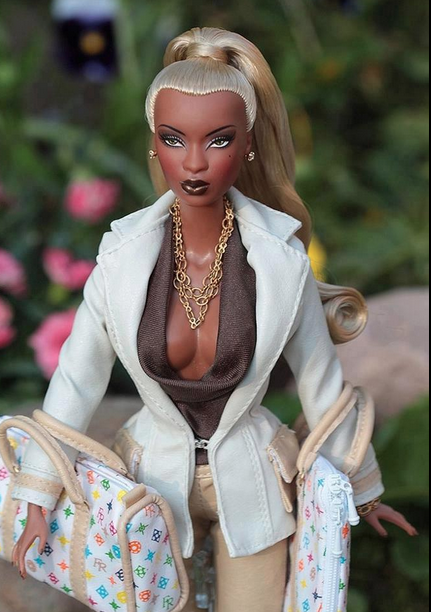 The doll is sporting blonde hair, gold chains, cleavage, and two bags that are strikingly similar to the Louis Vuitton monogram multicolor collection.

The only difference I see between Beyoncé, for example, and the doll is that the doll’s skin color is darker than Beyoncé’s. If we want to change the imagery of the African-American woman, we have to start exalting celebrities and other prominent figures in the black community that represent the imagery that we’d like people around the world to embrace

If you believe India Arie is the perfect example of black beauty, support her as well. As a community, we’ve got to grow out of becoming offended when people of other ethnicities define our appearance and/or actions. They are simply conveying what they believe we support. If we want to change the way we are perceived by other cultures, we have to make the change within ourselves.

This is no excuse to defend prejudice and persons who believe that all black men are criminals because they see black men on the news 24/7. There is a clear indication of systemic racism that severely influences the way we’re perceived across the world; however, we must take accountability and refute these negative images by exalting positive images.