Here is good news for you if you’ve been considering adopting a pet; the dog with human face is for adoption.

Isn’t it great that dogs are referred to as man’s best friends, and now we have one that looks like… a man?

Tonik, also known as the dog with the human face, is now up for adoption. The poodle-Shih Tzu mix from an Indiana animal welfare agency became a viral hit after photos of his man-like facade hit the ‘net. 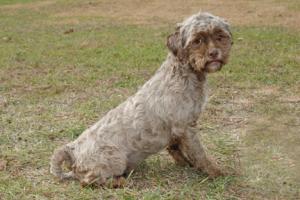 Tonik, who seems to have a permanently stressed expression, reportedly came to the Homeward Bound Animal Welfare Group from a kill shelter in Kentucky. Jen Schwartz, the owner of Homeward Bound, told HuffPo that the shelter recently took in dogs that required dental work and had illnesses that needed pricey treatments.

Fortunately, Tonik’s superstar status will land him in the right home.