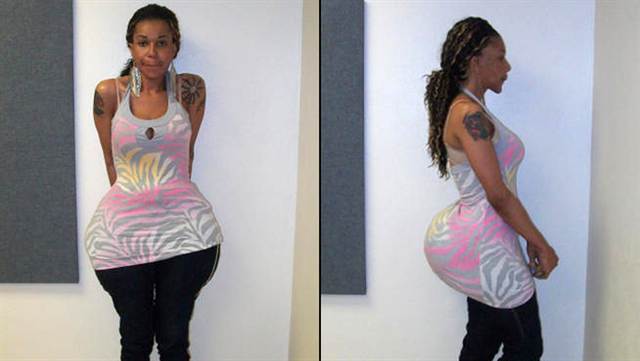 A woman accused of being a phony doctor has been charged with a crime, police say, after injecting a brew of Fix-A-Flat, cement, mineral oil and Super Glue into the body of a woman who wanted a larger derriere.

The self-described doctor’s ”own butt is the size of a truck tire,” according to a report in The Miami Herald, which stated: ”Investigators suspect she is part of an underground network of scam artists who have been offering ‘pumping parties’ and home buttocks augmentations across South Florida for years.”

The materials injected by Oneal Ron Morris, a transgender woman, almost killed the patient, police say. Morris on Friday was charged with practicing health care without a license, causing great bodily injury, a second-degree felony. Story highlights: Police were shocked with Morris’ appearance when they made the arrest. ”It’s not clear whether Morris was a victim of her own concoctions.” The injections into the woman’s buttocks had “hurt to the point that she was screaming,’’ Miami Gardens Detective Michael Dillon said. Police said Morris sent the woman home after sealing her wound with Super Glue.

The woman, whose name was not released, sought medical treatment, but fear and embarrassment kept her from telling doctors what happened for months. Police say she’s now burdened with medical bills, can’t work and continues to suffer from the ordeal.Injections of silicone or plastic into the buttocks are especially dangerous because the material can easily leak into one of the buttocks’ blood vessels. If the substance reaches the heart and lungs, that can cause a pulmonary embolism.

The buttocks are “one of the worst places for injections,” said plastic surgeon and blogger Dr. John Di Saia of San Clemente and Orange. He said: “Booty injections not infrequently go badly. Qualified doctors tend to not offer them, so people can find themselves in not-so-qualified hands. Buttock enhancement … is less predictable than many other operations.”